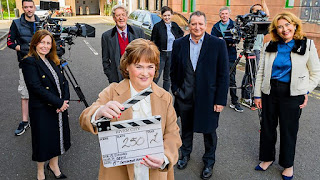 International singing star and River City superfan, Susan Boyle, will make a special cameo appearance in the BBC Scotland soap next month alongside series favourites Juliet Cadzow, Frank Gallagher and Stephen Purdon.
The Scottish songstress from West Lothian, who shot to overnight fame in 2009 after appearing on Britain's Got Talent, has been a long-time fan of River City and will be involved in the drama's charity calendar storyline in December.
The episode, which debuts on the BBC Scotland channel on Monday 6th December, sees the character Suzie Fraser (played by Juliet Cadzow) stunned when Susan Boyle steps in front of the camera to become a model for a charity photoshoot to raise money for the Molly's Corner Cafe.
As well as Juliet Cadzow, Susan Boyle's cameo sees her star alongside River City favourites including Frank Gallagher (Lenny Murdoch), Stephen Purdon (Bob O'Hara), Barbara Rafferty (Bernie O'Hara), Scott Fletcher (Angus Lindsay) and Kirsty Pickering (Jessie Murdoch).
Susan was thrilled to play a cameo role in the popular Scottish soap: "I had a brilliant time filming River City. All the cast and crew were so kind and welcoming, it was a great atmosphere! I'm a huge fan of the show and always watch it, so to be a part of it and on set was fantastic."
Martin McCardie, BBC Studios Series Producer for River City was delighted to welcome Susan to the set: "When Susan was on the set she was a total professional, but she is also a fan of the show, so it was great to see Susan meet the cast and see the sets. The charity calendar storyline is all about finding a well-known face with a big heart and a winning smile to take part - Susan Boyle is that person! She's welcome to revisit Montego Street any time she likes."
Juliet Cadzow, who plays the character of Suzie Fraser, was thrilled to work alongside Susan for the day: "Having such an internationally renowned star on set could have felt quite daunting, but Susan was so natural and unaffected and, indeed, it was almost as if she was overcome being with us on the River City set! She couldn't have made life easier for us all and it was such a pleasure to be on set with her."