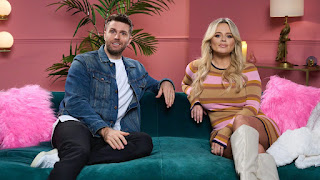 Joining the new series are Emily Atack, Asim Chaudhry, Sukh Ojla, London Hughes, Josh Jones, Jayde Adams and The Receipts alongside returning comedians including, Joel Dommett, Josh Widdicombe, Tom Allen and Rosie Jones.
Sky Original Dating No Filter sees some of the UK's funniest comedians provide raw and unfiltered commentary on members of the public embarking on blind dates. The hilarious show will return for a second series in 2022 and Christmas special in 2021 on Sky Max and streaming service NOW.
An exciting line-up of comedic pairings has been announced; Joel Dommett and Emily Atack, Josh Widdecombe and Rosie Jones, Asim Chaudhry and Sukh Ojla, Tom Allen and Suzi Ruffell, Chunkz and Yung Filly, London Hughes and Verona Rose, Josh Jones and Jayde Adams and The Receipts, all taking part this series. With our unsuspecting singletons heading out on blind dates ranging from line dancing and gin tasting to a wrestling masterclass, there will be plenty for the comedians to sit back and share their laugh out loud commentary on as dating is put under the microscope once again.
Produced by Monkey, which is part of Universal International Studios, a division of Universal Studio Group, the 6x30' series is set to return to screens in February 2022, but the fun starts early with an hour-long Christmas special this December. This one-off special will feature Joel Dommett, Emily Atack, Tom Allen, Josh Widdicombe, Rosie Jones, Suzi Ruffell, Asim Chaudhry, Sukh Ojla, Josh Jones, Jayde Adams, Chunkz and Yung Filly. The festive special, which includes a romantic trip to a reindeer park, will air on Sky Max and streaming service NOW this December.
Joel Dommett said: "I did Dating No Filter last series and I think almost everyone who did it last time wanted to do it again because it was super fun to do. You're basically just sat with a friend watching funny dates. It's so funny seeing what people do in that moment of awkwardness, because we've all experienced that moment. If anyone pointed me out on my first date with my wife, they would all be laughing and talking about how awkward it was."
Emily Atack said: "It's been amazing working alongside Joel on this series. We both had such a laugh having a front row seat and watching people go on some of the most hilarious blind dates. Viewers are going to really enjoy it."