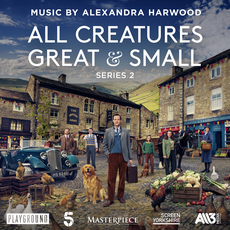 All Creatures Great & Small Series 2 Soundtrack on CD  - Released from 17th December
And to celebrate we have a great competition for you and 3 copies on CD to give away.
Synopsis:
On 17th December, Silva Screen Records will release Alexandra Harwood's original music for All Creatures Great & Small - Series 2. The album includes musical highlights from the second series with the last 2 tracks, Should Auld Acquaintance Be Forgot and All Creature Great And Small - Christmas, featuring in this year's Christmas special.
Since their first publication in 1970, the beloved books of James Alfred Wight, published under the pen name James Herriot, have held a special place in people's hearts throughout the world. Chronicling the heartwarming and humorous adventures of a young country vet, the books introduced readers to his unconventional mentor and the cast of farmers and townsfolk who lived and worked in the Yorkshire Dales in the 1930s.
Channel 5's new adaptation preserves the rich spirit, tone and values of Herriot's iconic characters and stories and has been an instant hit with viewers. Alexandra Harwood is a BAFTA Cymru Award-winning composer, whose films have screened worldwide. Previous to her work on All Creatures Great And Small she has composed scores for Mike Newell's feature film, 'The Guernsey Literary and Potato Peel Pie Society' starring Lily James, Michiel Huisman, Glen Powell and Sir Tom Courtenay, the Ballet 'Geisha' for the Northern Ballet and 'Thatcher: A Very British Revolution' BBC Documentary Series.
Pre-Order from Amazon at https://amzn.to/31UzcLf
For your chance to win just answer the question below.

COMPETITION CLOSED
Terms and conditions
1. Closing date 03-01-22
2. No alternative prize is available
3. When the competition ends as indicated on this page, any and all entries received after this point will not count and emails blacklisted due to not checking this page first.
4. Winners will be chosen randomly and will be informed via email.
5. Entries that come directly from other websites will not be accepted.
Posted by JD at 11:32

Email ThisBlogThis!Share to TwitterShare to FacebookShare to Pinterest
Labels: All Creatures Great & Small