Oti Mabuse confirmed as new judge on Dancing On Ice 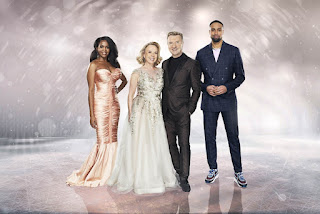 Oti Mabuse is to join the Ice Panel when Dancing On Ice returns to ITV and ITV Hub in January 2022. She'll be alongside fellow judges Ashley Banjo, Jayne Torvill and Christopher Dean. Phillip Schofield and Holly Willoughby will return to present the greatest show on ice.
Commenting on taking on this new role, Oti said: "As a professional dancer I have always had so much respect for the skating professionals on Dancing On Ice. It is an exceptional skill that is also so beautiful to watch. I'm feeling really enthusiastic about joining the panel alongside the legendary Torvill and Dean and Ashley Banjo. I can't wait to see the celebrities thrive as they learn how to ice-skate and to champion the professional skaters as they create incredible choreography. Having been on both sides of the table, I know a little bit about how they'll be feeling. It's more than an honour and I already can't wait to join the family."
Katie Rawcliffe, Head of Entertainment Commissioning, ITV said:
"Oti is not only a supremely talented dancer and choreographer but she brings enormous fun and energy to all that she does. It's fantastic to be welcoming her to our Ice Panel."
The celebrities taking to the ice this year are Coronation Street legend Sally Dynevor, Happy Mondays dancer Bez, Paralympian Stef Reid, Love Island's Liberty Poole, rugby star Ben Foden, Pussycat Doll Kimberly Wyatt, Paul Gascoigne's son, dancer Regan Gascoigne, pop star Rachel Stevens, professional dancer Brendan Cole, presenter Ria Hebden, BMX Olympic silver medalist Kye Whyte and The Vamps' Connor Ball.
Expertly guiding the celebrity novices from their shaky first steps to spectacular routines are their professional partners. Matt Evers, a part of Dancing On Ice since it launched on ITV in 2006, returns to the show alongside fellow series favourites Alexandra Shauman and husband Łukasz Różycki, Andy Buchanan and wife Robin Johnstone. Mark Hanretty, Brendyn Hatfield, Vanessa Bauer, Karina Manta and Joe Johnson all return. Reigning champion pro Angela Egan who lifted the trophy with Sonny Jay last series is also back. Completing the pro team are three brand-new additions to the 2022 line-up as world class competitive figure skaters Morgan Swales, Tippy Packard and Colin Grafton all make their Dancing on Ice debuts.
In the new year the celebrity contestants and their professional partners will be skating live each week in a bid to impress both the panel and the viewers at home who will ultimately decide who wins the show.