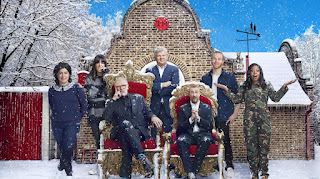 TASKMASTER'S NEW YEAR TREAT - 1ST JANUARY, 9PM
INTERVIEW WITH GREG DAVIES & ALEX HORNE
Let's talk through the contestants for this special, starting with Adrian Chiles.
Greg: He's absolutely hilarious, Chiles. I didn't expect him to be as hilarious as he was.
Alex: There was a bit in the pole task where Adrian really lost it and giggled like a baby for about a minute. I really enjoyed seeing him look so happy. He really lost it. It was great. Normally, slightly older gentlemen get teased for being slow by Greg, but he bonded with Adrian a lot.
Greg: We bonded over being middle-aged men. Speaking as a man in his 50s I can confirm our lives are made miserable by gastric problems, as Adrian said in the vinegar task when he got heartburn. He's my type of older gentleman.
You invited him to go camping with him, didn't you?
Greg: Yes, and I stand by that. I know that Adrian thought it was a joke, but I will go camping with him at a time and place of his choosing.
Alex: We also really enjoyed pitting him against one of our greatest Paralympians.
What about Baroness Warsi?
Alex: She was very TV savvy, and comedy savvy as well. And she made jokes that weren't bad. She really got stuck in with trying to persuade Greg that Claudia had done something not awful, which I enjoyed.
Greg: She tried to turn something into a contentious issue, saying I was out of touch with modern Britain. Which I dealt with. She was feisty.
And surprisingly came out with quite a few innuendos as well.
Greg: The Bawdy Baroness. She accused Alex and I of flirting with each other.
Alex: She was probably keen to make sure the stereotype of a fusty old Baroness was destroyed. She was there to show what she's really like, which is good thing. I really liked her. I thought she was plucky and spunky.
Greg: Regardless of where you are politically in life, it'd be difficult to deny that.
Alex: Yes, but she really tried to pull the heartstrings as well. She was playing the game at the beginning, which was very clever.
Greg: With anyone else that may well have worked, but I find that stuff grates with me. I know when someone's ploughing the furrow.
Alex: She definitely understood Taskmaster, she wasn't out of her depth in any way.
There was another surprising moment where she said that she could identify a drug by sniffing it.
Greg: Because of her legal background, yes. I didn't realise that's what goes on in Her Majesty's Courts. Law makers sniffing stuff.
What did you think of Lady Leshurr?
Alex: I'm not sure how much she knew about the show beforehand. She's one of our smallest ever contestants. Greg: I thought she was fun. She doesn't really care what anyone thinks, and I always admire that, especially in a young person. And as Alex points out, she's pint-sized. I was really pleased because the audience got behind her right away, which is good. I didn't think she was as well-known as Claudia Winkleman, but she held her own. Then I looked her up on YouTube, and one of her clips has got 65 million views.
Greg, she told me that you have such a way with words that you would make a good grime rapper.
Greg: Did she? Wow. Well, let's hope that this interview means that the right people get in contact with me at last.
You'd be up for that?
Greg: Of course! They say you should change job every seven years so I'm long overdue a change, and why not to grime?
Alex: Probably, annoyingly, you'd be quite good at it. Greg wore a big orange jacket yesterday for a bit. I couldn't believe it. It caught me by surprise.
Greg: It really fascinated you, my new jacket, didn't it? I often criticise Alex for his dress sense which is, across the board, pretty awful. And because I was wearing a bolder coat than I normally would, it drew his eye.


What about Claudia?
Alex: She was a bit like Mel Giedroyc, in that she was very keen to get in and do things quickly. She wasn't hanging around. She's a pro. She's done a lot of telly, and she's very, very funny.
Greg: She's very funny. I also think she's very used to being in charge. She did that thing that Victoria Coren Mitchell did, which is march into a room and say, "Right, let's get a few things straight right now. This is the way things are going to be." But then she remembers that she's the one being told to do things.
She shouted at Alex quite a lot to "shut up" and "stop talking". Has anybody ever spoken to you like that before, Alex?
Alex: Not for a good while. She was a bit of a whirlwind. I'm still slightly in awe of her. It's Claudia Winkleman! She's got that star quality. Having her in the Taskmaster house was quite incongruous. It felt like we were in the middle of Strictly and I watch Strictly with my kids, so I didn't know what to do with myself.
Greg: I thought she was great. She entered into Taskmaster in the way you hope people will enter into it – without any clear plan for victory. From the very beginning I don't think she could have cared less how many points she ended up with, and I greatly admire that. She was excitable though. She enjoyed it without caring much about the outcome.
And finally, Jonnie Peacock.
Alex: He showed off his athleticism a couple of times. The Peacock family are big fans of the show, so I think he's done them proud, which is good. It's his mum's favourite programme apparently, so he was mainly doing it for her.
Greg: I didn't meet Jonnie because I wasn't there during the tasks and he couldn't come into the studio as he was ill. But watching the tasks I can see he was quite canny, quite cerebral. In a couple of them he thought, "Oh, there must be another way of doing this," which a lot of the other contestants didn't do at all. I thought it was a good combination: the visuals of Johnny's athleticism, and then going back to the studio for the contrast of Alan Davies. It worked a treat. I think those guys should work together more.
Alex: He took it seriously. He took it like an athlete would, I think. He was competitive and ambitious. He had that thing that athletes do of being really focused. Straightforward, I suppose. He's used to training all day by himself. Jonnie and Sayeeda were the most competitive. They're the ones who wanted to win the most.
Greg: His technique was genuinely impressive.
Will there be more celebrity specials?
Alex: We both felt it was great having people outside of comedy on the show. Maybe there's room to have three comics and two non-comics in the same series, or just one, or mixing it up. It would be good to have an athlete or a historian or something. Someone like Mary Beard. She was my lecturer at university. She was amazing, really inspiring. She's a good one. Quite scary.
Greg: I really enjoy involvement from non-comics. I don't know what it means going forward, but it's really exciting.