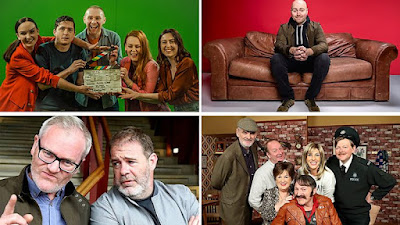 Dry Your Eyes, a new comedic sketch programme on BBC One Northern Ireland, will premiere on Monday, January 10th at 10.35pm.
Dry Your Eyes, produced by the Hole in the Wall Gang, features an up-and-coming group of performers and writers who are new to our screens.
With the original edition of the show, the Hole in the Wall Gang first brought several memorable characters to the screen 15 years ago.
Niamh McAllister, Michael Stranney, Bernadette Brown, Diona Doherty, and Cailum Carragher make up the new on-screen lineup, bringing audiences a freshly baked batch of cringeworthy masterpieces that address modern reality in their own strange way, yet speak with our own local voice.


The award-winning comedian Paddy Raff comes to BBC Northern Ireland in January with a new four-part series, The Paddy Raff Show, to help you get through the winter blues.
Granny Raff, Father Pat, and Malone's most well-known citizen Nigel, who is looking for love, appear in Paddy's comedic sketches about family life. While new character Kara-efforts Lynne's to find the perfect career bring a few laughs.
Nice One Productions produces The Paddy Raff Show for BBC Northern Ireland.


Ma, Da, Cal, Uncle Andy and all the gang are back as Give My Head Peace runs across three episodes beginning on Friday 7 January on BBC One Northern Ireland at 10.35pm.
And BBC Northern Ireland has also commissioned a new comedy drama written by and starring local comedy duo Grimes and McKee.
The action revolves around the fictitious GAA club of St Mungo's. It is currently in production with the makers of 'Hope Street' Long Story TV, and will air later this Spring.
The Blame Game, produced by Moondog Productions and hosted by Tim McGarry, with panellists Diona Doherty, Neil Delamere and Colin Murphy, makes a return later this year with a new series following a successful run at the end of last year recorded in venues across Northern Ireland.


All programmes will be available to watch live on BBC One Northern Ireland and afterwards to watch anytime on BBC iPlayer.