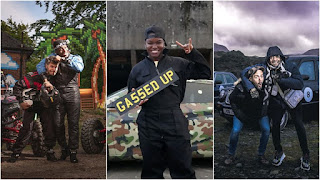 Mist, a MOBO award-winning artist and Brummie petrolhead, takes on six celebs in some of the UK scene's toughest challenges in Gassed Up. Nicola Adams OBE, a double Olympic gold medalist in boxing, comedian and TV presenter Joel Dommett, Grammy-nominated songwriter and footballer Chelcee Grimes, TV personality and entrepreneur Spencer Matthews, grime MC and TV presenter Big Narstie, and actor Ryan Thomas will all take the stage.
Mist will compete against one of his famous guests in a high-octane battle each episode, aided by professional driver and Drift Queen Becky Evans, pro BMXer and joker Ryan Taylor, and Supercar Dealer Rob Kelly.


Mentored and judged by specialists from the scene, Mist and his guests will learn the tricks of the trade, equipping them to create and commandeer crazy vehicles, leading to an ultimate head-to-head track challenge.

Nicola Adams OBE says: "I am a big adrenaline junkie so becoming a drone expert and taking on Mist and Ryan in the ultimate game of hide and seek for this episode of Gassed Up was epic! Watch out BBC Three…you've never seen a show like this!"

Chelcee Grimes says: "Gassed Up is something so different, and for me such a great experience. From where I started to where I finished it was worlds apart and I'm excited to see all the other celebrities to see how they got on. Also the viewers should watch just for Bex and Mist because they are just the best duo to be around and I learned so much in such a short time! I can definitely say after the whole experience I'm now well and truly, GASSED UP!!!!"

Big Narstie says: "If you like cars, this is the show for you. If you don't like cars, that's your business."

Ryan Thomas says: "I loved getting the opportunity to take on Mist in Gassed Up for BBC Three, and on his home turf no less! Audiences can expect drifting, donuts and general chaos as we go head to head – I can't wait for everyone to see this brilliant new series. Expect big stakes, big energy, big competition and big laughs."