Celebrities confirmed for BBC Three's Eating with My Ex 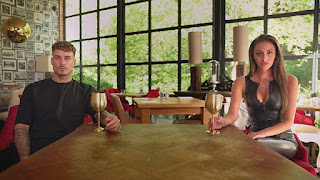 Being a celebrity doesn't make breakups any easier, and closure can be difficult to come by in any relationship. That's why, when the BAFTA-nominated show Eating with My Ex (produced by Thames, a Fremantle property) returns to BBC Three, it'll feature a bountiful crop of 12 ex-couples in six celebrity specials.


Chloe Veitch and Kori Sampson from Too Hot To Handle, Maeva D'Ascanio and Miles Nazaire from Made in Chelsea, Chloe Brockett and Harry Lee from The Only Way Is Essex, Lesia and D Live from The Rap Game UK, and Priya Gopaldas and Brett Stanland from Love Island are among the celebrities who have sat down to discuss their relationships in the brand-new series. Suzi Ruffell, Amy Tapper from Gogglebox, Hollyoaks actress Malique Thompson-Dwyer, Tia Kofi from RuPaul's Drag Race UK, Bethan Kershaw from Geordie Shore, The Apprentice contestant Souleyman Bah, and Ibiza Weekender's Callum Izzard will join them in confronting their ex-partners.


Eating With My Ex, airs on the BBC Three launch night on Tuesday 1 February 2022.