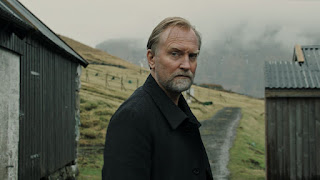 The six-part series, which was filmed in the Faroe Islands and is based on Jógvan Isaksen's crime novels, follows journalist Hannis Martinsson (Ulrich Thomsen), who receives an unexpected message from Sonja, his estranged daughter, stating that her life is in danger.
Hannis unwillingly goes to the Faroe Islands to investigate, and Sonja's death is discovered in the gory waters of a whale hunt. His quest for answers quickly lands him in hot water with the local cops, and he finds a network of secrets inside the tight-knit community.


The series is created by Torfinnur Jákupsson and co-written with Donna Sharpe (West Of Liberty) and stars Ulrich Thomsen (The New Pope), Maria Rich (Follow The Money) and Olaf Johannessen (The Exception).
REinvent is producing the series with Kyk Pictures and Truenorth. Kasper Barfoed (Crime Reporter) and Davíd Óskar Ólafsson (The Valhalla Murders) have directed the series.