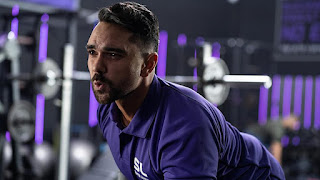 Written by Steve Stamp and Ben Murray, Peacock is the story of Andy, a personal trainer at Sportif Leisure in the midst of an identity crisis.

Peacock is a film written by Steve Stamp and Ben Murray about Andy, a personal trainer at Sportif Leisure who is going through an identity crisis. Selfies, swagger, and gym memberships are all part of his life, and vanity and achievement are frequently horribly entwined. Andy realises he's a man out of time after he loses a work promotion to a younger, better-looking PT. He must demonstrate that he is more than his nice looks and carefully crafted dating profile. He sets out to demonstrate that he is capable of being regarded seriously. But can he do it?


Allan 'Seapa' Mustafa (People Just Do Nothing) stars as Andy Peacock, Lucien Laviscount (Emily in Paris) as Jay, Thomas Gray (Absolutely Fine) as Spooner, Susan Wokoma (Year of the Rabbit) as Liz, Callie Cooke (The Stranger) as Carly, Mandeep Dhillon (After Life) as Georgia and Sophia Di Martino (Loki) as Blue.
Steve Stamp says: "Clearly I am not someone qualified to write about going to the gym so it's actually mostly about a bunch of flawed messes struggling to function in the modern world."


The series is currently filming in Liverpool and will air later this year.