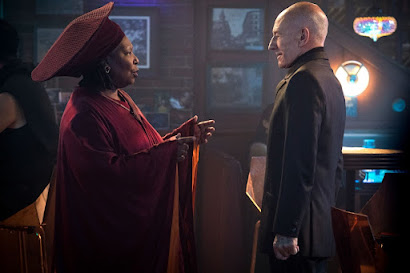 The official trailer for season two of ViacomCBS's successful original series Star Trek: Picard was released today by ViacomCBS's streaming service, Paramount+. Season two of Star Trek: Picard will release exclusively for Paramount+ subscribers in the United States on Thursday, March 3. Following the launch, new episodes of the 10-episode second season will air on Thursdays every week. The teaser also features a first look at Academy Award winner Whoopi Goldberg, who reprises her beloved role as Guinan from Star Trek: The Next Generation.

The renowned Jean-Luc Picard and his crew go on a bold and exciting new voyage in Season 2: into the past. Picard must recruit the help of old and new friends to tackle the dangers of 21st-century Earth in a desperate race against time to safeguard the galaxy's future – and face the ultimate test from one of his greatest adversaries.

Patrick Stewart reprises his legendary role as Jean-Luc Picard, which he played for seven seasons on Star Trek: The Next Generation, in Star Trek: Picard, which follows this iconic character into his next chapter.