The first look image for the second series of Sky Original comedy Bloods has been released. 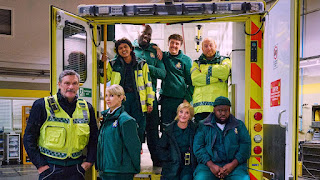 Sky has released a sneak peek at the second season of the critically acclaimed comedy BLOODS. The quirky dream team Wendy and Maleek, played by BAFTA-nominated Samson Kayo and Golden Globe-nominated Jane Horrocks, return as we follow them and their paramedic colleagues in the life-saving realm of a south London emergency service. The series will be broadcast in two parts on Sky Comedy and the streaming service NOW, with the first five episodes premiering in March 2022.


The second season introduces a new source of friction for Wendy and Maleek in the form of Wendy's obnoxious son, Spencer (Nathan Foad). Katherine Kelly (Innocent, Liar) joins the cast as the acting therapist and listening ear at the ambulance station.