Under the Vines - Preview and Trailer 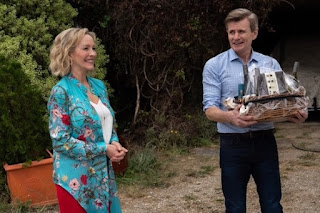 Raise a drink to the premiere of a brilliant new drama. Under the Vines is a new, engaging sitcom with caustic wit and soft undertones. The show premieres exclusively on Acorn TV in the United Kingdom. The first two parts of the six-part series will air on January 10th, with subsequent episodes airing on Mondays.

Charles Edwards (The Crown, The Terror, Downton Abbey) and Rebecca Gibney (Wanted, Packed to the Rafters, The Flying Doctors) feature as two incongruous city slickers who inherit a failing winery in rural New Zealand. Daisy Munroe (Gibney), a Sydney socialite, travels to Peak View, New Zealand, to see her recently deceased stepfather's winery, which she plans to sell. She had no idea that the vineyard has a co-owner, Louis Oakley (Edwards), a surly UK-born lawyer who likewise travels to the wine area to avoid a series of unpleasant events in his life. Despite having never worked a day in their lives and despising each other, the two must make Oakley Winery a success so they can sell it, break up, and move on.

Email ThisBlogThis!Share to TwitterShare to FacebookShare to Pinterest
Labels: Under the Vines