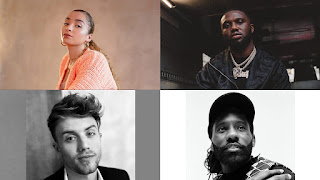 Joining the previously announced panel of judges, Miguel, Blondey and Marc Jacques Burton, alongside host Clara Amfo, these special guests will provide their industry knowledge and expertise to the nine budding creatives throughout the series.
The Drop is a new entertainment format for BBC Three that will invite nine of Britain's most promising up-and-coming creatives to enter their streetwear brand into a life-changing competition. Filmed in Manchester, the series will capture the cultural synergy between fashion, music, sport, celebrity and business and provide one individual with a life-changing prize.


Asim Chaudhry, comedian, writer and actor
Asim Chaudhry says: "When asked to be a guest in The Drop, I just had to say yes. Getting to meet some of the UK's young and upcoming designers was a great experience."
Dan TDM, YouTuber
Dan TDM says: "It was a lot of fun meeting the creatives as a guest on The Drop. They had some awesome ideas and I can't wait for viewers to see what they came up with."
Dogger, UK skateboarder
Dogger says: "I was delighted to be invited on the show as a guest judge. I've always been someone who cares about what I wear when I'm skateboarding or when I'm on stage so it seemed like the perfect opportunity for me to give my two cents to some of the UK's up and coming fashion designers."
Ella Eyre, singer-songwriter
Ella Eyre says: "I love streetwear, it's all I wear! So, I was super excited to be a guest judge on The Drop. I had so much fun seeing some incredible young designers bring their fresh ideas to life."
Headie One, rapper and singer
Headie One says: "It was great to see the designs of the creatives in The Drop and get to judge their pieces. The designs I saw were fresh, dynamic and things I would consider buying myself."
Jeremy Lynch, footballer and content creator
Jeremy Lynch says: 'It was a pleasure to be asked to appear as a guest judge on The Drop. Miguel, Clara, Blondey and Dan were a joy to meet & work with. Looking forward to seeing the show drop!"
JME, Grime MC and producer
JME says: "I enjoy fashion that makes me think and is outside of the box, which is why I was up for being a guest judge on The Drop alongside Miguel, Marc, Blondey and Clara. There were some memorable pieces from the creatives that really stood out and caught my attention."
Kimberly Wyatt, singer and Pussycat Dolls star
Mahalia, singer-songwriter
Mahalia says: "I really enjoyed being a part of The Drop. Fashion is a passion of mine so it was great to see how passionate the creatives were about their creations. I can't wait for everyone to see to see them too!"
Nayna McIntosh, founder and CEO of Hope Fashion
Nayna McIntosh says: "Working with this group of young and talented entrepreneurs [for The Drop] was hugely exciting. Operating in a more sustainable way is not for negotiation, and their creativity and drive towards this is extremely inspiring to see. For that alone, they must be applauded."
Roman Kemp, radio host and TV personality
Roman Kemp says: "I really enjoyed being a guest judge in this exciting competition, especially alongside Miguel, Marc and Blondey. It's great to be part of a show where young people can express themselves and it's really fun seeing what each of the talented creatives brought to the table. There were definitely some things I would wear myself!"
Savannah Keenan, UK skateboarder
Savannah Keenan says: "As a skater who also really enjoys fashion it was interesting to be part of the show and see the way in which each of the designers interpreted skater style and attempted to put together what they believed to be a suitable outfit."
Wretch 32, rapper, singer and songwriter
Wretch 32 says: "Style is the window to one's character that adds an extra layer to one's confidence
I'm happy to be a part of the show and was pleased to meet the future of UK's design."