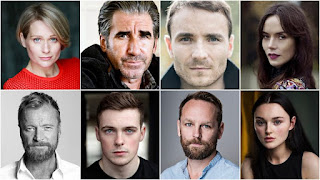 Declan Lawn and Adam Patterson created and wrote Blue Lights, which follows three rookie police officers working in Belfast, which is a very dangerous area to be a cop. It was created with help from Northern Ireland Screen as part of their ongoing partnership with the BBC with Two Cities Television.

Grace (Siân Brooke), a mother of a teenage kid, has left her secure profession as a social worker in her forties to join the Northern Ireland Police Service. She straddles the narrow line between the personal and the professional, having previously worked in social care. It's the greatest bet she's ever taken, and only a few weeks in, she's already making so many errors that her decision no longer appears to be a good one.
Annie (Katherine Devlin), who is concerned that her chosen route may require her to leave everything she's ever known behind, and Tommy (Nathan Braniff), who is determined to prove himself while being disastrously bad at the practical side of frontline work, are among her other fellow rookies.


All three are new police officers in their probation period with the PSNI, the odds are at least one of them isn't going to last. The pressure is immense, but if they succumb to it, they won't survive. Often the rookie officers don't know the extent of the peril they are in, or who they can trust. What's it like to have to hide your job from neighbours, friends and even family? How do you distinguish between who needs your help and who wants you dead simply because of the uniform you wear?


Siân Brooke says: "I am so thrilled to be playing Grace in Blue Lights. There is something incredibly special that Declan and Adam have crafted in these scripts and I was hooked from the very first page. Belfast is the beating heart of this piece and it's a city I've been wanting to work in for a long time."
Declan Lawn and Adam Patterson say: "Every writer wants to explore their own place, and their own society as authentically and as honestly as they can. We feel enormously grateful to BBC drama for letting us do that with Blue Lights. And to do it with a cast boasting so much new and established talent makes it even more exciting."