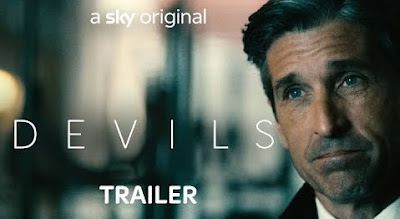 
Devils is a gripping power drama set in the realm of global banking, created by Sky Italia, Lux Vide with Big Light Productions in association with Sky Studios, Orange Studio, and OCS and aired in all Sky countries. NBCUniversal Global Distribution is in charge of international sales, and the series has been sold in more than 160 countries.
The protagonists of Guido Maria Brera's bestseller The Devils (published by Rizzoli) are back for an eight-part second series that continues the story of the silent but devastating financial war that has afflicted the Western world over the last decade through fragments of reality interwoven with fictional characters. Money is the most powerful weapon in this clandestine struggle.


Along with the two leads - Alessandro Borghi as Massimo Ruggero, who was appointed CEO of the New York-London Investment Bank at the end of the first series, and Patrick Dempsey as Dominic Morgan, one of the most powerful figures in international finance - the returning cast also includes Malachi Kirby (The Race – Corsa mortale, Radici), Pia Mechler (Everything Is Wonderful), and Paul Chowdhry (Live at the Apollo, Swinging Daniel Duval, the founder of Subterranea, is played by Lars Mikkelsen (The Killing, Sherlock, House of Cards).

Devils Series 2 Synopsis
2016, Brexit is just around the corner and Trump is fiercely striving to be elected President of the United States. It's been 4 years since Massimo Ruggero successfully thwarted Dominic Morgan's plan against the Euro and despite paying a high personal price, Massimo has decided to remain CEO of NYL. Increasingly challenged by the board, Massimo has decided to pursue a policy of pro-Chinese acquisitions, bringing in new investors and team members from China. But it is his old mentor Dominic Morgan who reappears and warns him: the new Chinese partners are ready to betray him to wage a silent war between China and the US for the technological control of the data of millions of people. Massimo will have to team up with Dominic if he wants to fight on the right side. Who should Massimo believe? A question that, between social media platforms, Bitcoins and 5G, will take him up to 2020: in the midst of the global pandemic, Massimo will finally have to choose which side to take.