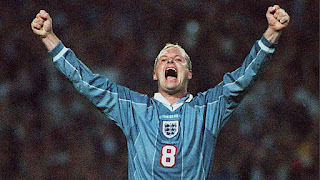 Gazza tells the true story of 20 years of modern British history through archive footage and contemporary narration, as well as providing a startling new perspective on the heinous and illegal measures taken by some in the tabloid press to gain access to his private life and manipulate it for their own gain.
This dramatic series weaves together crucial footballing action and cultural milestones from the era with never-before-seen archive and intimate home movies to present a unique and personal look into Paul's life.


Paul Gascoigne says: "This is the real story of my time in football - the good and the bad of who I am - and what really happened around me. So much of this has never been seen before. It feels good to be telling my side of the story and to be working with the Western Edge Pictures team and the BBC, who have delivered this in the best way possible to my fans."

For many, Paul Gascoigne was the face of 90s Britain, captured on countless front and back page splashes; the most celebrated young footballer in the world and a newspaper editor's dream, his on field brilliance was matched only by his off-field antics. His story has been told many times before, but never like this.
As football soared in popularity, a cheeky and charming new hero of the people came along - a young, working-class footballer from Newcastle called Paul Gascoigne. He relished the riches and limelight that fame provided, but he was deeply troubled by a painful past.
At the same time, the 90s saw a fundamental shift in the British tabloid media with their efforts to capture ever larger readerships for their newspapers. This appetite created young editors and journalists whose own ambitions depended on delivering that audience, something they did by taking control of the world of celebrity.
A sporting and tabloid phenomenon, the character of 'Gazza' became a household name, frequently dominating both the front and back pages of newspapers. In the battle for readers, journalists went to increasingly extreme lengths to get the latest scoop on one of England's most controversial footballing stars. His addictions and behaviour were too often out of control and he badly hurt those around him, but he also found himself exploited by those who did not always have his best interests at heart.
Gazza is a snapshot of a crucial moment in our cultural history when the levels of fame and money in football started their exponential rise, fuelling the growing modern obsession with our sporting stars. It is also a very personal story about the intense pressures that come with this fame. Pressures which many young sports stars feel today.