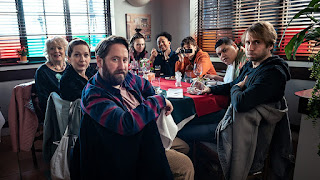 Following the success of Comedy Playhouse, Here We Go (6 x 30') returns to BBC One and BBC iPlayer for a full season, starring Alison Steadman (Gavin & Stacey), Katherine Parkinson (The IT Crowd), Jim Howick (Ghosts), Tom Basden (After Life), Freya Parks (School's Out Forever), and Tori Allen-Martin (London Kills).
Here We Go, written by Tom Basden and produced by BBC Studios Comedy Productions, follows the Jessop family as they face a variety of life's challenges, including changing careers, maintaining a marriage's romance, adopting a healthier lifestyle, kidnapping a dog, destroying a swimming pool, and sabotaging a wedding.


After filming his family's tragic attempt to carve out a holiday in the midst of the epidemic in the 2020 debut episode, the series follows Sam, the Jessop family's youngest son, throughout the year. Moving back and forth in time, each episode presents a personal, perceptive, and humorous portrait of a modern British family doing its best to support one another, while inadvertently irritating everyone else.
Despite the fact that nothing goes as planned for the Jessops, their tenacious spirit sees them find unexpected joy in the midst of disappointment and laugh in the face of calamity, offering a plethora of humorous moments for viewers to enjoy.


Tom Basden says: "I'm delighted to be bringing the Jessop family to BBC One this year. Hopefully their spectacular failures will make the rest of us feel a bit better about ourselves."