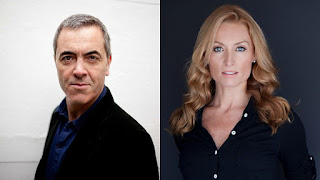 
Victoria Smurfit (Marcella, Once Upon a Time) will take on the new role of Olivia, an enigmatic widow at the centre of Brannick's latest case whose intentions may be far from innocent.

When the killing of a crooked accountant uncovers a trail of greed that threatens to reveal his true identity as legendary assassin Goliath, Tom (James Nesbitt) and the accountant's widow, Olivia (Victoria Smurfit), must stay dangerously close together. Tom and Olivia draw in Tom's fellow officers DS Niamh McGovern (Charlene McKenna), DCS Jackie Twomey (Lorcan Cranitch), and DC "Birdy" Bird (Chris Walley), as well as his daughter, Izzy (Lola Petticrew), as they try to solve the riddle her husband left behind, and become more and more immersed in the puzzle of each other, until deception and betrayal build to a shattering climax.


James Nesbitt says: "It's brilliant to be back filming in Northern Ireland and reunited with the gang for the second series of Bloodlands. I couldn't be happier to be welcoming Victoria to the cast, having first worked with her over 20 years ago! I can't wait for audiences to see what's next for the cunning and complex Tom Brannick."
Victoria Smurfit says: "I'm beyond excited to be joining the cast of Bloodlands and to be working with Jimmy again. I adored watching the first series!"