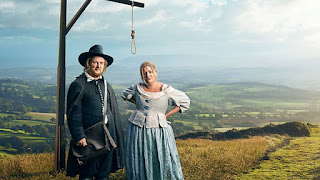 The Witchfinder is a BBC Two original comedy about a witchfinder and his suspect on a road trip through an England ravaged by civil war, starvation, and pestilence.

The year is 1645, and there is widespread dread of witches. Puritanical Christianity, ingrained superstition, and a willingness to scapegoat outsiders have combined to create a tinderbox of distrust in which few people are safe. Witchfinding has thrived in this climate, as self-proclaimed witch specialists gain hero status by probing charges of witchcraft and eliciting confessions.
In 1640s East Anglia, a failing witchfinder (Tim Key) carries a suspected witch (Daisy May Cooper) to a trial that could change his life forever. His captive, however, is the worst imaginable travel companion: an inquisitive, unrefined lady whose ability to pierce his pomposity and ask difficult questions transforms a routine voyage into a life-altering ordeal.