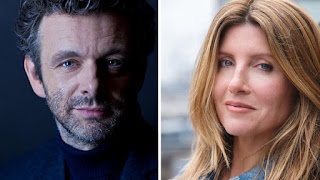 "In all actions concerning children, whether undertaken by public or private social welfare institutions, courts of law, administrative authorities or legislative bodies, the best interests of the child shall be the primary consideration"
- Article 3 of the UN Convention on the Rights of the Child


This is the story of a family that has been torn apart by having to make decisions that no parent wants to make. Nicci and Andrew are played by Sharon Horgan (Catastrophe, Together) and Michael Sheen (Good Omens, Quiz). They have two daughters, Katie (Conversations With Friends) and Marnie (Jack Thorne's A Christmas Carol), who are played by Alison Oliver (Conversations With Friends) and Niamh Moriarty (Jack Thorne's A Christmas Carol).
Marnie's illness is life-threatening. The doctors believe that allowing her to die is in her best interests, but her loving family disagrees. As they struggle to consider this major decision, they begin a fight that will take them through every level of the legal process. Who makes the decisions? And who's best interests are we talking about?


Additional cast include Noma Dumezweni (The Undoing) as Samantha, Chizzy Akudolu (Holby City) as Mercy, Des McAleer (Hope Street) as Eddie, Mat Fraser (His Dark Materials) as Greg, Gary Beadle (Grantchester) as Frank, Jack Morris (Strike) as Tom, Pippa Haywood (Bodyguard) as Judge Spottiswood, Shane Zaza (Happy Valley) as Fred, Lucian Msamati (Gangs Of London) as Derek and Lisa McGrillis (Mum) as Brenda.
Sharon Horgan says: "Best Interests broke me when I first read the script and then again after talking with Jack about it. Covid seems to have shone a closer light on the desperate inequalities that exist for our disabled community so this felt very timely. It's a big subject but it's in Jack Thorne and Michael Keillor's safe hands. I'm thrilled to be working on this story with a super talented cast, the wonderful Michael Sheen and Noma Dumezweni, and my gorgeous daughters; Alison Oliver and Niamh Moriarty."
Michael Sheen says: "Jack Thorne is such an extraordinary writer and he has approached this incredibly important and urgent subject with humanity, honesty and humour. I feel very fortunate to be part of this production and to work with the brilliant Sharon Horgan and some of the most talented actors around."


Filming is currently underway in London to air next year on BBC One and BBC iPlayer.