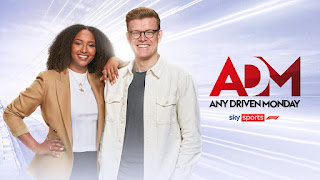 Sky Sports has announced the launch of a brand new show and the addition of Naomi Schiff as an analyst as Formula One fans around the world prepare for the most anticipated season in recent history.
From March 14, Any Driven Monday will be a 60-minute live show streamed every Monday at 6pm on Sky Sports F1's YouTube channel following race weekends. It will be the fans' go-to for all things racing, bringing the best action, analysis, interviews, and debate across not only F1, but also F2, F3, and IndyCar series. Schiff will also be part of the race presentation team, starting in Bahrain.


Co-hosted by former W Series racing driver Naomi Schiff and Matt Baker from Sky Sports Studios in London, contributors will join the two newest members of the Sky Sports F1 team from across the world. Guests will include stars of F1 and other categories as well as influential voices and celebrity fans of the sport.
Schiff is a Rwandan-Belgian professional racing and stunt driver. Fresh from presenting the Mercedes AMG Petronas F1 Team car launch alongside Natalie Pinkham, she joins the Sky Sports F1 team for the 2022 season.
The 27-year-old is currently the W Series' Diversity and Inclusion Ambassador and reserve driver who started karting at the age of 11. Since then, she has raced in prototype, GT and single seater cars, winning the 2014 Clip Cup Asia Championship Title, 2018 KTM GT4 X-Bow Battle Championship Title and 2nd Place in 2018 ADAC Zurich 24 Hours Nürburgring.