The Witchfinder - Interview with Tim Key and Daisy May Cooper 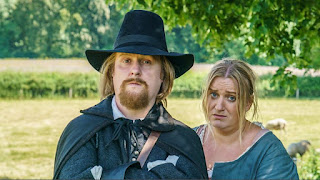 A failing witchfinder (Tim Key) transports a suspected witch (Daisy May Cooper) through 1640s East Anglia to a trial that could change his fortunes forever in this brand new comedy from the writers of Alan Partridge. His captive, however, is the worst imaginable travel companion: an inquisitive, unrefined lady whose ability to pierce his pomposity and ask difficult questions transforms a routine voyage into a life-altering ordeal.


Hi Tim. Who do you play in The Witchfinder?

Interview with Daisy May Cooper


Hi Daisy, who you play in The Witchfinder?


I play Thomasine in The Witchfinder.
What is Thomasine's story through The Witchfinder?
Well, Thomasine is sort of street-smart but a bit thick, and because she's so different and because she likes to drink, and she likes to arm wrestle and stuff in the tavern, and do all the stuff that I kind of do myself, people think that she might be a witch cause she's not behaving how I suppose women should be behaving.
So she gets taken by the witchfinder, who is played by Tim Key, to court in Chelmsford. And it's a bit like Trains, Planes And Automobiles but with a witch and a witchfinder.
What attracted you to the project?
What attracted me to the project, bar the cash, was probably working with the Gibbons because they're brilliant, they do all the Partridge stuff, and working with Tim Key. He's a very odd man but he's very funny. He's going to kill me for this.
Lovely accolade for Tim there. Would you talk to us a bit more about your other fellow cast members - there are some great cameos.
Oh we've got amazing cameos. We've got Jessica Hynes, who has got these dodgy teeth made and looks completely mental, and she's just one of the funniest people, and makes this character of Myers her own, and it's mad and it's brilliant. You've got Daniel Rigby playing Hebble - he's just such a brilliant actor, really funny, and I quite fancy him a bit. Do you know what it's really funny, all of the crew really fancy him. Because of his hair, it's the long wig that he wears. For some reason it's the wig and the cloak, there's something very appealing about it.
Reece Shearsmith is just amazing, he can steal an entire scene just by saying one word. I've always been such a massive fan of his work but my god, some of his stuff just steals the entire show, he's amazing.
Ricky Tomlinson's in it! Acting alongside him... he's been in massive things like the Royle family, and he's just Jim Royle, it's like having Jim Royle on set because he's so warm and so funny. Oh it's been amazing.
You've worked with some wonderful co-stars also from the animal kingdom, any ones in particular that stand out in your memory?
Yes. There is a horse called Bram and he is a little, well I'm swearing, he's a little b*stard. Basically he's so intelligent, this horse that I have to ride. Between takes he goes to eat the grass and the trainers will say, "no Bram just wait until we've finished the scene then you can eat the grass" and this horse pretends to itch his leg and then last minute will just like go and grab a bit of grass. That blows my mind. And he knows that I'm an amateur rider because I had never ridden horses until this show and he knows it, so he'll start playing up and start being a bit of a bugger, cause they're just so bloody intelligent. The biggest arsehole in this cast is a horse.
1640s East Anglian gender politics appear to feature male privilege at the top of the list, anything that has surprised you researching or working on The Witchfinder?
When it comes to sort of 1600 gender politics I don't know what to say in fear of being cancelled. Probably say the wrong thing. Men are b*stards, that's it, that's it really. They've always been b*stards. There are some alright ones.
Why should we watch The Witchfinder?
Not only is there a superb cast, it's brilliantly written and it's really different. It's the Gibbons brothers' debut, they've been working on, you know, so many Partridge things for such a long time and now it's their time to do their own thing - I think this project's been going on for, like, seven years but my god you can see all those seven years of work into this. It's something really really different. It's funny.
Finally, three words that spring to mind when you think of The Witchfinder?
God three words. That's hard. Three words that spring to mind when I'm thinking of The Witchfinder would probably be sodding, bloody, horse. Bram. You b*tard.