Alan Carr and Amanda Holden to host The Italian Job 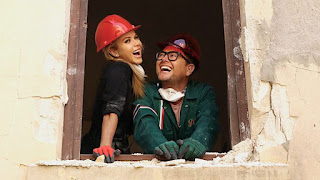 Amanda and Alan: The Italian Job follows the couple as they join the ranks of the 'One Euro' property purchasers, buying a piece of heaven for a reasonable price in a little village situated in the sun-kissed hills of rural Sicily.
They'll spend the summer immersed in the Sicilian way of life, transforming their depilated house into a luxury vacation home, thanks to a common enthusiasm for travel and interior design.
Alan and Amanda have both remodelled homes in the past, but neither has attempted a project of this magnitude. While they'll attempt everything from plumbing to painting and plastering, they'll enlist the help of local contractors to show them the ropes.


As the pair roll up their sleeves to take on the challenge in their own inimitable style, they'll also throw themselves into the local lifestyle, making friends with their Sicilian neighbours and exploring what this beautiful region of Italy has to offer.
Alan Carr says: "After presenting two series of Interior Design Masters I feel now it's time for me to pop my hard hat on, slip on my steel toe capped boots and really get my hands dirty. Working in beautiful Sicily with one of my dearest friends is like I've won the jackpot. Expect a summer of drilling, demolition and hopefully la dolce vita!"
Amanda Holden says: "Alan and I came up with the idea for this show together and approached the BBC as we knew it was the perfect home.
"We are both very passionate about interior design and we'll be very hands on, injecting some much needed life into an area of Sicily that's in need of some Holden & Carr magic. Although we're on the same page most of the time, I'm more practical and organised than Alan. However he's up for some shameless bargaining so that will help us keep on budget!
"We've already started filming and one thing's for sure, we're not shy of a power tool!"


At the end of the summer the property will go on sale and all the profits will be donated to charity.