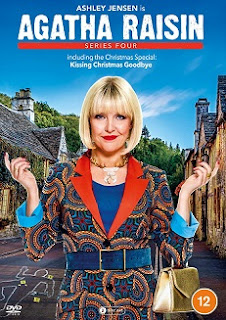 Agatha Raisin Series 4 - Released from 6th June
And to celebrate we have a great competition for you and 4 copies on DVD to give away.
Synopsis:
Internationally acclaimed actor Ashley Jensen (Ugly Betty, After Life) returns as the titular, adored amateur detective Agatha Raisin. Based on the best-selling novels by the late M.C. Beaton, the fourth series of Agatha Raisin aired on Acorn TV and Sky this May and Agatha Raisin Complete Series Four and One – Four Box Set inc. the Christmas Special: Kissing Christmas Goodbye arrive on DVD and digital 6 June from Acorn Media International.
Four series on and the Agatha Raisin detective agency continues to thrive, and there’s no shortage of mysteries for the savvy sleuth to solve. Resolving not to spend any more time dwelling on her AWOL on-off partner, James (Jamie Glover – Waterloo Road), Agatha and her merry band of helpers have more cases to crack including a jam competition that spirals into a sticky mess when a judge is mysteriously murdered – Wilkes (Jason Barnett, Bridgerton) hires our favourite formidable PI to keep a lid on things.
When James whisks Agatha away on a seaside trip to work on his new book, the last thing she expects is to end up in Snoth-on-Sea and be suspected of murder once again. And in an even more shocking turn of events, she’s called in to investigate when her ex-fiancé’s fiancée is murdered the night before their wedding...
This cracking fourth series promises laughs galore and a corking good time, with our favourite charming detective – the inimitable Agatha Raisin.
Series Four boasts an A-list line up of British talent including: Vincent Regan (300, Troy), Keith Allen (Kingsman the Golden Circle, the Others, Ace Bhatti (Bohemian Rhapsody, Bend it Like Beckham), Sophie Ward (Jane Eyre, Book of Blood), Robbie Gee (Snatch, Underworld), Phil Daniels (Quadrophenia, Chicken Run), and Taz Skylar (Boiling Point, The Kill Team) amongst others.
Pre-Order from Amazon at https://amzn.to/38UnvrP
For your chance to win just answer the question below.

Who plays Agatha Raisin?
Send your name, address and of course the answer to competition365@outlook.com
Terms and conditions
1. Closing date 13-06-22
2. No alternative prize is available
3. When the competition ends as indicated on this page, any and all entries received after this point will not count and emails blacklisted due to not checking this page first.
4. Winners will be chosen randomly and will be informed via email.
5. Entries that come directly from other websites will not be accepted.
Posted by JD at 18:59