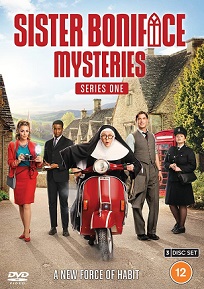 The Sister Boniface Mysteries - Series 1  - Released from 16th May
And to celebrate we have a great competition for you and 2 copies on DVD to give away.
Synopsis:
From the world of Father Brown, comes the First Series of 'The Sister Boniface Mysteries'.
The Sister Boniface Mysteries is set in 1960s rural Warwickshire and follows the investigations of Sister Boniface, Bride of Christ, vintner, and Crime Scene Investigator. Police forensics is rudimentary by today’s standards.
DNA is yet to be discovered. Blood testing can take days. The notion of trace evidence is in its infancy and the preservation of crime scenes is shockingly hit and miss. Fortunately the Great Slaughter Constabulary has a secret weapon in its fight against crime.
Hidden deep in the countryside is St Vincent’s Convent, a small community of wine making nuns where ensconced in a laboratory is Sister Boniface. An IQ of 156 and a PHD in forensic science, plus an addiction to popular detective fiction and a fully equipped crime laboratory make Boniface an invaluable aid to Police investigations.
Mud, blood, stains, hairs and fibres. If there is evidence to be found Boniface will find it. Poisons, trace evidence, blood stains, etymology. She’s more up to speed on the latest forensic techniques than the Police.
In her role as official Police Scientific Advisor, Boniface works alongside the dashing Detective Inspector Sam Gillespie and Felix Livingstone, a high-flying Bermudian Detective Sergeant. Felix was supposed to be on secondment to the Metropolitan Police but an administrative error lands him in Great Slaughter.
A cast of eccentric local characters combined with his boss’s reliance on a nun leave him reeling. Although as Sam points out, that “Nun” ensures they have the highest clean-up rate in the county.
Dazzler Media presents the first series of Sister Boniface Mysteries, from the makers of Father Brown and Shakespeare & Hathaway - Private Investigators, coming to Blu-ray, DVD and Download from 16th May.
Pre-Order from Amazon at https://amzn.to/3Me4H5e
For your chance to win just answer the question below.

In what decade is The Sister Boniface Mysteries set?
Send your name, address and of course the answer to competition365@outlook.com
Terms and conditions
1. Closing date 30-05-22
2. No alternative prize is available
3. When the competition ends as indicated on this page, any and all entries received after this point will not count and emails blacklisted due to not checking this page first.
4. Winners will be chosen randomly and will be informed via email.
5. Entries that come directly from other websites will not be accepted.
Posted by JD at 17:08

Email ThisBlogThis!Share to TwitterShare to FacebookShare to Pinterest
Labels: The Sister Boniface Mysteries