Interview with Romesh Ranganathan about his new comedy Avoidance 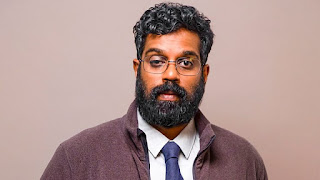 Jonathan and his partner Claire are splitting up, but he's desperate not to tell their son Spencer, so runs away with him to stay with his sister Danielle and her wife Courtney.
Tell us about your new series Avoidance and what audiences can expect from the show?
Avoidance is about a conflict-avoidant beta male, who is so frustrating to live with that his partner leaves. He is then forced to try and sort himself out, for the sake of this son. He ends up staying with his sister and her wife…it's funnier than it sounds. It's supposed to be funny with a bit of heart, but I'd settle for mildly diverting at this point.
This is your first series with your own production company Ranga Bee for the BBC, how was that?
It's cool to have a production company, but it does add extra anxiety when you know that any issues are something you need to worry about. I didn't enjoy the idea that if I moaned about anything I was essentially slagging myself off.
Tell us about the writing process for Avoidance.
Ben Green and I had a version of this idea about five years ago and every now and then we would dip back into it and develop it further. Eventually we decided to put it together as an idea for the BBC. Ben, Neil Webster, Shaun Pye, Kefi Chadwick and myself thrashed out storylines and ideas, and then eventually wrote individual scripts before poring over them to make sure our characters seemed like real people. Then we spent the rest of the process worrying it was all rubbish.
Do you have any similarities to your character Jonathan?
His conflict-avoidant beta maledom is based on my own character, but I would like to think I hide it a bit better than Jonathan does. The fact that Ben agreed it would be a good starting point for a comedy suggests I don't.
Do you have any favourite memories from filming?
I think the first scene with Kieran who plays Spencer - he was who I filmed with on the first few days. He was just so natural and brilliant and I remember thinking we were onto something good with him. It was a really nice moment, swiftly followed by waves of anxiety about my own performance.
You have some great talent involved, when you wrote it did you have the casting in mind?
We didn't have people in mind specifically, but we were lucky that in each of the main roles, the cast had taken the characters beyond how we even imagined they could be. Jess, Lisa and Mandeep are the most incredible actors, and they brought their characters to life in a way that had us all buzzing. We have really lucked out with them - every day they were looking at scenes and how to approach them and improve them.
How was filming with your fellow cast mates? Have you worked with any of them before?
I worked with Lisa on King Gary and thought she was amazing, and worked with Jess on Judge Romesh, which I thought went well, but she has since told me I seemed a bit stressed on that, and I thought I was being charming, so I'm glad we've had this experience to wash that away. I watched Mandeep in After Life and thought she was excellent, but had never worked with her. Kieran is of course a megastar in the making.

Episode 1 Preview:
Romesh Ranganathan stars in this warm and bittersweet comedy series about a man with severe conflict avoidance issues, who is forced to change for the sake of his son. Also starring Jessica Knappett,
Lisa McGrillis and Mandeep Dhillon. Jonathan and Claire are splitting up - well, technically Claire is splitting up with Jonathan who keeps insisting they just wait for the dust to settle.
But she is adamant, and most importantly, they need to tell their nine year-old son Spencer as soon as possible. Jonathan, who is in denial, runs away with Spencer to stay with his sister Danielle and her wife Courtney to avoid confronting his problems.
Jonathan insists it's just a blip, and Dan is frustrated by his denial. Meanwhile, Dan's wife Courtney is not a fan of Jonathan's, and when Dan softens towards her brother and tells him they're there for him, Courtney's reaction is not so emphatic.


Episode 2 Preview
Claire comes to drop Spencer off at Danielle and Courtney's, where Jonathan is temporarily living. Spencer seems upset and Claire confides in Jonathan that Spencer is not coping well with the split.
The following morning over breakfast, Jonathan tries to get Spencer to open up about his feelings, but the conversation gets derailed by the news that Spencer has been invited to Laser Tag that afternoon by Jed, a cool kid Spencer is keen to befriend.
Meanwhile, at the gym, Courtney complains to Dan about Jonathan's continued presence in the house, making it clear she wants him out, whereas Dan hints that it's nice having a kid around the house. As they head home, Jonathan's boss Keith calls Dan saying that Jonathan's not been at work and isn't returning his calls, and as such will be firing him.