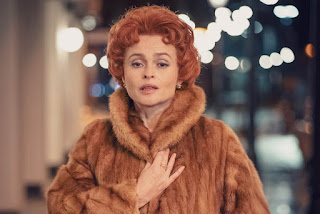 The first glimpse of Academy Award-nominated and BAFTA-winning actor Helena Bonham Carter (The Crown, Enola Holmes series 1 and 2, The King's Speech, Harry Potter, Burton and Taylor) as Noele "Nolly" Gordon has been released as filming on the series commences.


Noele (or Nolly to her friends) was a legend in her own lifetime. As flame-haired widow Meg Richardson in the long-running soap opera Crossroads, she was one of the most famous people in Britain. Then in 1981, at the height of the show's success and the peak of Nolly's fame, she was axed without ceremony, without warning and with no explanation. With the boss's words "all good things must come to an end" ringing in her ears, Noele Gordon found herself thrown out of the show that was her life for over 18 years.
Nolly brings the true Noele Gordon once more into the spotlight. The Queen of the Midlands, a star who could be tough, haughty and imperious, grandly sweeping into rehearsals from her Rolls Royce, but also a hard-working actress who was fiercely loyal and loved by cast and crew alike. And at last, the biggest question of all can be answered – why was she sacked? Nolly reveals the truth, the consequences, and the legacy of that terrible day.
Nolly is a bold exploration of how the establishment turns on women who refuse to play by the rules, the women it cannot understand and the women it fears. And it is a love letter to a legend of television, and to the madcap soap she starred in, Nolly is an outrageously fun and wildly entertaining ride through Noele Gordon's most tumultuous years, and a sharp, affectionate and heart-breaking portrait of a forgotten icon.