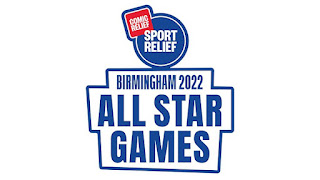 This August, Sport Relief, Birmingham 2022 and the BBC are coming together to bring viewers a one off, All-Star version of the Commonwealth Games.
Two teams from the sports and entertainment industries will compete at the Birmingham 2022 Commonwealth Games this summer to raise money for life-changing causes in Sport Relief All Star Games: Birmingham 2022 (1x60) on BBC One and BBC iPlayer. The teams will be captained by five-time Paralympic champion Ellie Simmonds OBE and double Olympic champion Dame Kelly Holmes.
The action-packed event will see the celebrities and sporting legends as you've never seen them before as they lace up their trainers and step outside of their comfort zones.
Teams will be put through their paces as they take on five Birmingham 2022 sports, competing in front of live crowds at the actual venues during the Games. The action will take place across Lee Valley Velopark for Cycling - Track, Alexander Stadium for Athletics, Arena Birmingham for Rhythmic Gymnastics, Smithfield for Basketball 3x3 and the NEC Arena for Table Tennis.
Only one team will emerge victorious and be crowned Sport Relief All Star Games: Birmingham 2022 Champions.
Ellie Simmonds OBE says: "I'm so excited to lead the Blue Team in the All-Star Games and feel really proud to be supporting Sport Relief again. I've been involved in Sport Relief for years, but I know this is going to be the most fun. I can't wait to get the team into training and make sure we all work really hard to raise as much money as we can… but also win! As much as I respect and admire Kelly – she's such an incredible role model for young athletes - I'll leave that at the door. Winning is all that matters. Bring it on!"
Dame Kelly Holmes says: "I love seeing people getting involved in sport and giving things a go – getting out of their comfort zone and just having fun. This competition is right up my street and it's a real honour to leading the Red Team. I've been a supporter of Sport Relief for such a long time now and know the work they support is completely life changing. I hear Ellie is determined for her team to win but I don't fancy her chances!".