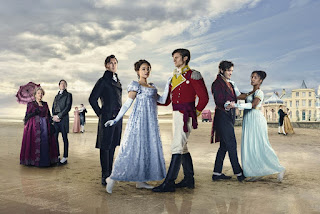 Sanditon, the acclaimed drama based on Jane Austen’s final, unfinished novel left fans in suspense and clamouring for more with the first series’ heart-breaking finale. The new series will pick up the action nine months later, as the town is growing in popularity, featuring characters familiar and new.  Series two picks up with heroine Charlotte Heywood (Rose Williams) returning to the picturesque coastal resort, determined as ever to live a life less ordinary, as she takes up the role of governess to the wards of Alexander Colbourne (Ben Lloyd-Hughes). Charlotte is joined by her spirited younger sister, Alison Heywood (Rosie Graham) who comes to Sanditon to pursue her own romantic dream.

Georgiana Lambe (Crystal Clarke), in her final summer before turning 21, is eager to establish her own identity and causes trouble in the name of love. But will she take the chance of being even more alone? The dysfunctional Denham family's secrets and deceit continue to shake the foundations of the bright coastal town as Tom Parker (Kris Marshall) works to rebuild Sanditon but faces many unexpected challenges. Additionally, as the Army establishes Sanditon as their new post under the command of the endearing Colonel Lennox, the second season promises fresh relationships, friendships, and difficulties for the locals (Tom Weston-Jones).

Email ThisBlogThis!Share to TwitterShare to FacebookShare to Pinterest
Labels: Sanditon