To celebrate the release of new show Banshee, available to own and watch instantly via blinkbox and out on DVD & Blu-ray on 2 September, we take a look at the most brutal scenes to be scripted into HBO’s cinematic TV shows. 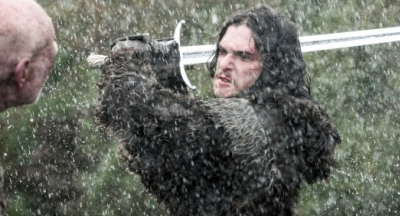 GAME OF THRONES – Rains of Castamere
Game of Thrones is one of the most successful shows that HBO has ever produced, principally for its in-depth storyline and bloodcurdling violence. In the episode Rains of Catamere, audiences witnessed a complete onslaught of blood and gore that culminated in the horribly graphic Red Wedding. The amiable Starks were massacred in animalistic, devastatingly brutal scenes. Throats were slits, eyes were gouged and women were stabbed – all while dying direwolves howled in the pouring rain.

BANSHEE – Prison Flashback
Banshee is one of HBO’s latest incarnations, and boy is it an explosive action series that will leave audiences stunned. The story traces a recently paroled master thief, Lucas Hood, who assumes the identity of the Sheriff of Banshee. When a former fellow inmate recognises Lucas from his time in prison, this interaction prompts Lucas to have a series of flashbacks.

It’s revealed that when in prison, Lucas had to fend off the advances and sexual harassment of a gay Albino inmate. Lucas had to regularly thwart the Albino from sexually abusing him and was once nearly killed in the process. During one confrontation, in front of the entire prison population, Lucas defeated the Albino by severing his penis and gouging the Albino’s eyeballs, finally killing the brute.

BOARDWALK EMPIRE – Death of Jimmy Darmody
Charming Jimmy was a fan favourite in Boardwalk Empire and served as Nucky’s talented protégé. However, once Jimmy fell out with conspiring mobster, Nucky, the prospect of his death was on the cards. Jimmy himself eerily predicted Nucky’s callousness when he said that Nucky can’t be ‘half a gangster’. When Nucky chillingly invited Jimmy to a late night reconciliatory meeting at the war memorial, Jimmy’s bloody epitaph may as well have been engraved. Nucky cruelly murdered his one-time protégé, with the fateful shot ringing out in the night’s sky.

SOPRANO’S – Killing Christopher Moltisanti
Mob boss Tony Soprano (James Gandolfini) brought a new lease of life to TV. Soprano’s revealed that it was possible to create a cinematic character driven series and Paul Gandolfini personified this in his larger-than-life powerful screen presence. Christopher Moltisanti (Michael Imperioli) depicted the role of the aspiring mobster, who Tony adopted as his contemporary. However, it was not all plain sailing for Christopher in the gangster realm, particularly when he became addicted to intravenous drugs. When Christopher crashed a car, which had Tony in the passenger seat, it materialised that the young gangster was high on heroin. Tony, infuriated with Christopher who put the don’s life in danger, was more worried about his own driving license. As the glaze-eyed addict choked on his own blood, Tony placed a meaty hand over Christopher’s nose and mouth. The harrowing moment concluded with the two mobsters locking eyes as Christopher silently died.

TRUE BLOOD – Sam kills Rosalyn
The phenomenal world depicted in True Blood is premised on the notion that vampires are living among us and need to feed on humans to survive. True Blood also boasts one of the most creative, horrifically gruesome deaths on TV and so it’s unsurprising that shape shifting (inhabiting another body) is the method in question here. In one particular scene, the barman Sam transformed into a spy and flew into Rosalyn’s mouth, who is a politician. Once inside Rosalyn’s body, Sam shifted back to his usual frame, causing her to explode in a splatter of blood and guts. As Rosalyn’s remains scattered across the screen, the amalgamation of CGI and visual effects appears truly outstanding.

Released on Blu-ray, DVD and available to own and watch instantly via blinkbox on 2 September 2013