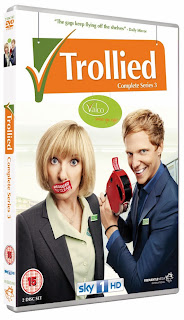 Trollied Series 3, out to own on DVD December 30th

“Trollied is funny…. So go and get trollied”  - Radio Times

Now into its third series, Trollied is set in Valco and finds the funny in one of our most familiar surroundings and focuses on the types of characters we all recognise: bored checkout staff, ineffectual managers and a range of customers, from the irate to the downright bizarre.

From the producers of The IT Crowd and The Office, Trollied, is definitely one to check out...

This 2 disc set contains all 13 episodes of Series 3 plus the Christmas Eve special.

Email ThisBlogThis!Share to TwitterShare to FacebookShare to Pinterest
Labels: Trollied