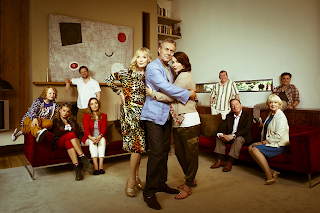 Anthony Head, Lindsay Duncan and Susie Blake will appear as part of an all-star cast in Gold’s debut scripted sitcom, You, Me & Them alongside an impressive raft of comedy talent.

You, Me &Them (6x40") tells the story of Ed (Anthony Head - Little Britain, Merlin, Buffy The Vampire Slayer) and Lauren (award-winning Welsh actress Eve Myles - Frankie, Torchwood, Merlin).  The couple are madly in love, despite their 20 plus-year age gap, but Lauren's family and everyone around them seems to have an opinion on the subject.  To complicate matters further Ed’s ex-wife Lydia (film and TV actress Lindsay Duncan - Alice in Wonderland, Margaret) lives next-door.

Lauren and Ed share their home with Ed’s loveably hapless brother Alan (Emmerdale star Nigel Betts) whilst Ed’s chancer grandson Tim (Joshua McGuire – About Time) never seems to be too far from his grandfather and his grandfather’s wallet.  Ed’s ex-wife repeatedly refuses to leave the couple in peace and Lauren’s family are constantly meddling.  Even Ed’s friends are convinced Lauren’s a trophy girlfriend.   You can choose your partner but you can’t choose your family.  Will there be triumph in the face of adversity?  You’ll have to wait and see.

The series is created and written by Steve Turner, whose comedy credits include ITV's Great Night Out, and produced by Hat Trick Productions (Outnumbered, Spy, Episodes, Have I Got News For You, Room 101, Some Girls, Facejacker). It marks Gold's debut with an original scripted sitcom and forms part of the channel's bold commissioning strategy, investing in fresh and unique content.
Posted by JD at 20:47

Email ThisBlogThis!Share to TwitterShare to FacebookShare to Pinterest
Labels: Me & Them, You