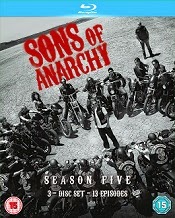 Synopsis:
Sons of Anarchy is an adrenalised drama with darkly comedic undertones that explores a notorious outlaw motorcycle club’s (MC) desire to protect its livelihood while ensuring that their simple, sheltered town of Charming, California remains exactly that, Charming. The MC must confront threats from drug dealers, corporate developers, and overzealous law officers. Behind the MC’s familial lifestyle and legally thriving automotive shop is a ruthless and illegally thriving arms business. The seduction of money, power, and blood.

This season begins with Jax and Tara as the club’s new king and queen after learning the truth behind his father's death and facing the consequences of the club's illicit deeds. Stripped of his patch after Jax discovers he was complicit in John Teller’s death, Clay recovers from gunshot wounds that nearly killed him while Gemma is faced with a new life without the comfort of her family. With the threat of RICO still looming, Jax has to find a way to protect his family and save his club as SAMCRO is pulled into a conflict with a potent new enemy.

For your chance to win just answer the following question... Competition Closed


Winners will be chosen randomly and will be informed via email.
Posted by JD at 14:47

Email ThisBlogThis!Share to TwitterShare to FacebookShare to Pinterest
Labels: Sons of Anarchy