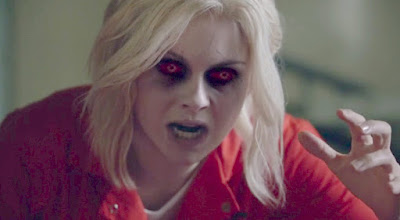 It’s a cold heart indeed that can resist a bad guy or gal gone good, even more so if they’re monstrously inclined. Just like Liv in iZombie, not all monsters are evildoers, in fact some strive for goodness despite the odds being stacked against them. Here’s a countdown of the greatest monsters with a heart to celebrate the release of season one of iZombie.

iZombie - Liv
When Liv awakens to discover she is a zombie, she’s not giving up being a human that easily. Refusing to kill, she joins the coroner’s office to feast on brains of already-dead people. However, when she realises it’s the deceased’s memories in addition to their brains that she’s imbibing, she decides to help the police catch their murderers with her new psychic abilities.

Guardians of the Galaxy - Rocket, Groot, Drax, Gamora
A misfit bunch of aliens and animal experiments, this team of thieves, mercenaries and rapscallions prove to have hearts of gold when faced with the obliteration of the galaxy as they know it, banding together to save all life, human or not. And without the prospect of being remunerated for their efforts, too.

Gremlins - Gizmo
The sweetest little furball ever there was, but ‘mogwai’ Gizmo carries a monstrous secret within him; the ability to spawn evil doppelgangers if he gets wet. If fed after midnight, these furballs transform into scaly-skinned devils intent on murder, destruction and ultimately, populating the world with fellow monsters. Can they be stopped by Gizmo and his human, Randall?

Lilo and Stitch - Stitch
Stitch is alien experiment number ‘626’, who is designed to destroy everything. When he escapes his intergalactic prison and lands in Hawaii, he is adopted by Lilo who mistakes him for a rescue dog. Lilo is being raised by her older sister and her antics have alerted social services, who are threatening to take Lilo away. Will Stitch’s destructiveness split up Lilo’s ‘ohana’?

Buffy the Vampire Slayer - Angel
Angel (David Boreanaz) is the vampire with a soul, cursed by the gypsies because he tortured and drained their favourite daughter, and doomed to live forever haunted by his past atrocities. Angel (the vampire) falls in love with Buffy (the slayer), and when she falls for him in return, it sets Angel on a path to losing his newly-regained soul in their doomed partnership.

Shrek
Curmudgeonly ogre Shrek has a kind heart under his warty, and ill-mannered exterior. When the fairytale character-hating Lord Farquaad exiles every fantastical creature from the kingdom to Shrek’s swamp, he is not happy, and travels to convince the Lord to repatriate them and return his solitude, which he agrees to do if Shrek can rescue Princess Fiona.

Beauty and the Beast
The terrifyingly bad-tempered Beast was enchanted as punishment for his vanity and cruelty when he was human and is confined to reclusivity in his beautiful castle. When Belle, searching for her missing father, stumbles across his castle, the Beast falls for her, but can she overcome her fear of his appearance?

The Incredible Hulk
One of the most tortured superheroes of all time, the Hulk’s alter ego Dr. Bruce Banner was poisoned by a chemical accident, and his exposure to gamma rays means he is doomed to lose himself to the Hulk every time he gets angry. Hunted down by the military, the Hulk tries to hide his identity and to limit his emotional outbursts that result in his change.

Quasimodo - The Hunchback of Notre Dame
Misshapen orphan Quasimodo is cast away by his horrified mother and raised by an evil priest who keeps him locked away from humans, ringing the bells of Notre Dame. When beautiful gypsy Esmeralda hides in the church for sanctuary, Quasi falls in love. But as hideously malformed as he is, can he win her love in return?

Deadpool
Wade Wilson was a special forces commando, who discovers he is riddled with cancer. In a failed experiment promised to cure his cancer, but comprised mostly of torture, Wade is left hideously disfigured, and disguises himself as masked vigilante ‘Deadpool’, to protect his loved ones from the scientists searching for him.

Own iZombie on DVD now
Buy from Amazon by clicking here!