The Best Squads in Kids TV 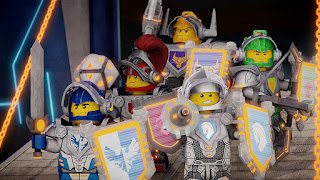 Some of them have powers, some of them are completely ordinary but these kids are a force to be reckoned with, fighting bad guys and solving crimes on a daily basis. To celebrate the release of LEGO®  NEXO Knights: Season One on DVD, one of the latest incarnations of the LEGO®  franchise, we’re taking a look at the 5 best squads in kids TV.

LEGO®  NEXO Knights
The NEXO Knights are a powerful team of young warriors equipped with advanced technology! As new graduates of the Knights’ Academy they are sworn to protect the Kingdom of Knighton from dark and deadly forces, such as Jestro – the former court jester who has turned to dark magic and has summoned an army of lava monsters to attach the kingdom. Together, Clay, Aaron, Macy, Lance and Axl must use their NEXO Powers to defeat their enemy’s.

Scooby Doo – The Mystery Gang
Fred, Velma, Daphne, Shaggy and Scooby Doo! Coolsville’s finest adolescent crime-solving gang has been unmasking ghouls, ghosts and monsters for almost 50 years (without aging a day of course). Whether it’s the Black Knight, Redbeard’s Ghost or Miner 49er this bunch of pesky kids rally together and always solve the case. Oh, and don’t forget those Scooby Snacks!

Teenage Mutant Ninja Turtles
When a young boy dumps his four pet turtles in the sewers of New York City, they crawl into a pool of strange ooze… which is where their mutations into humanoid creatures began. The four brothers soon fell under the care of their rat-sensei, Splinter and soon became masters in the art of ninjutsu with Donatello wielding a bo staff, Leonardo who battles with two katana, Michelangelo and his nunchucks, and Raphael kicking but with his sai!

Teen Titans
Mixing moody teenagers with super powers… what could go wrong? Batman’s sidekick Robin takes the leading role with his allies (and best friends) Starfire (the alien princess who can fire energy beams), Cyborg (the half-cyborg), Raven (the half-alien, half-demon hybrid) and Beast Boy (the shapeshifter). This awesome five-some protect the earth from a whole host of bad guys each using their own unique talents and abilities to save the day.

The Powerpuff Girls
Sugar, spice and everything nice… and Chemical X – an accidental addition to the ‘perfect little girl’ that granted Blossom, Bubbles and Buttercup flight, super-strength and X-ray vision (to name but a few). The trio are regularly called by Townsville’s mayor to fight the villains attacking the city, flying through the sky with their signature pink, blue and green energy trail.

OWN LEGO® NEXO KNIGHTS: SEASON ONE ON DVD FROM FEBRUARY 13