John Barrowman will host a brand new All Star Musicals alongside Elaine Paige. 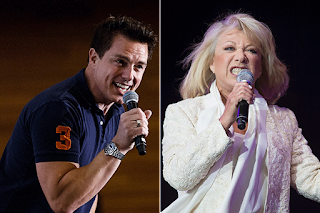 John Barrowman will host a brand new All Star Musicals alongside a panel of critics compiled of some of the West End and Broadway's most distinguished talent, led by theatre legend Elaine Paige.

Seven celebrities will be flexing their theatrical muscles as they embark on the ultimate musical theatre masterclass in a show stopping one night spectacular.

The show, produced by Shiver, the award-winning ITV Studios label, will see a crop of famous faces take to the legendary London Palladium stage to perform an iconic musical number. Each of the celebrities, all of whom have been selected based on their stand out performance skills, will be aiming to impress the West End audience, as well as the panel.

The show will feature numbers from a range of famous musicals, both contemporary and traditional, with the theatre audience deciding at the end of the night whose performance wowed them the most.

All Star Musicals will also feature very special performances from John and Elaine, as well as other critics due to be confirmed in due course.

The celebrities will be supported by a spectacular West End chorus line and, in the lead up to their big performance, will receive training from expert choreographers and vocal coaches.

John Barrowman said "I can’t wait to bring something fabulous to the TV screens, working with new friends and teaming up with some special old friends, this should be a great night of entertainment - let’s make All Star Musicals Fabulous."

Elaine Paige added "All Star Musicals is the perfect opportunity for me to channel two of my greatest passions - musical theatre and mentoring. I'm looking forward to following the celebrities on their journey to performing on London's most prestigious stage, and of course it's an added bonus to have a front row seat on the night itself!"

Siobhan Greene, Head of ITV Entertainment said "I love this show and it's brilliant to have it back for another night at the Palladium. An 'OMG' cast of celebrities to be announced, a "Fabulous" host in John Barrowman and a panel that are all the absolute real deal.... this is going to be a five star treat."

Richard Hastings, Creative Director, Shiver said “All Star Musicals is back at a time when musical theatre is in rude health in the U.K and who better to mentor our celebrities than the legend that is Elaine Paige? Elaine is an icon of both the West End and Broadway and will give the programme an extraordinary authenticity, as well as add a massive sprinkling of stardust to proceedings.”