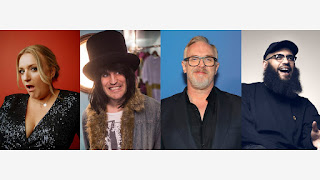 Never Mind the Buzzcocks, the iconic pop culture panel show, is returning exclusively to Sky and NOW as a Sky Original.
Sky today announces the commission of a new series of the legendary Never Mind the Buzzcocks. The renowned music themed comedy show will return to our screens as an 8 x 45' series, plus a one-off Christmas special, with brand new host Greg Davies (Taskmaster, Man Down). The Sky Original will air this autumn on Sky and streaming service NOW and is produced by Talkback (a Fremantle label), the production company behind all previous series of Never Mind the Buzzcocks.
Returning to the show, Noel Fielding (The Mighty Boosh, The Great British Bake Off) will be a team captain opposite Daisy May Cooper (This Country), with Jamali Maddix (Hate Thy Neighbour) featuring as a regular guest. Each week they will be joined by a roster of top music and comedy stars to compete against each other. Viewers can expect the unpredictability of the original series, with some of the best known and loved rounds remaining, alongside some new surprises thrown in along the way.
Greg Davies said: "I have always loved Never Mind the Buzzcocks and am thrilled to be the new host on Sky. We have brilliant comedic talent on the team and plenty of exciting musical guests will be joining us. All that being said, I'm so sure that no one reads these press quotes in their entirety that I'm going to finish by listing types of bread: rye, sourdough, sliced white. Oh, and cob."