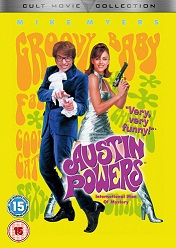 Re-Released under the Cult Movie Collection banner, Austin Powers International Man of Mystery is out on DVD and Blu-ray on the 22nd June and to celebrate we have a great competition for you and 3 DVDs to give away

Synopsis:
In 1967, fashion photographer and spy Austin Powers (Mike Myers) is on the verge of catching his arch-nemesis Dr Evil (also Myers) when the latter has himself cryogenically frozen. Powers follows suit, only to be revived thirty years later when Evil has emerged to threaten the world once more.

Teamed with Vanessa Kensington (Elizabeth Hurley), the daughter of his original partner, Powers has to get over his culture shock in time to battle his old foe. Mike Myers wrote and stars in this spoof of 'Matt Helm' and James Bond movies.

Competition Closed
Posted by JD at 08:50