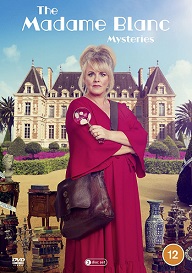 The Madame Blanc Mysteries on DVD  - Released from 13th December
And to celebrate we have a great competition for you and 3 copies on DVD to give away.
Synopsis:
Escape to fabulous France this winter with TV favourite Sally Lindsay (Coronation Street, Still Open All Hours, Scott & Bailey), who not only stars as the eponymous lead, but also created and co-wrote The Madame Blanc Mysteries, a charming and entertaining new series that’s been described as ‘Antiques Roadshow meets Midsomer Murders’ (TV Times).
The show is set to delight on DVD and digital on 13 December 2021, courtesy of Acorn Media International, following its TV debut on Channel 5.
When Mancunian Antiques dealer, Jean White’s (Lindsay) husband, Rory, is killed in a car crash on the way back from a business trip in France, life as she knows it, is changed forever. Not only has she lost her husband, but she soon discovers that he was living a double life and has blown all their money – leaving her destitute and penniless.
With everything snatched from her, Jean reluctantly relocates to their one remaining asset – a cottage in French antiques hotspot, Sainte Victoire, where she begins to investigate Rory’s mysterious death. There she is joined by an eclectic bunch of on-screen legends, including Judith (Sue Holderness – Only Fools and Horses), Dom (Steve Edge – Phoenix Nights), Jeremy (Robin Askwith – Confessions) and Charlotte (Sanchia McCormack – Broadchurch). But Jean quickly learns that the circumstances surrounding the accident are more suspicious than they first appeared. When a series of antiques-related mysteries erupt around the village, Jean gets caught up in Sherlockian shenanigans – but can she solve the case close to her heart?
Historical artifacts, happy-go-lucky characters, and a loveable lead: The Madame Blanc Mysteries is the modern murder-mystery with heart and humour we’ve all been waiting for.
Pre-Order from Amazon at https://amzn.to/3EvSBjZ
For your chance to win just answer the question below.

COMPETITION CLOSED
Terms and conditions
1. Closing date 20-12-21
2. No alternative prize is available
3. When the competition ends as indicated on this page, any and all entries received after this point will not count and emails blacklisted due to not checking this page first.
4. Winners will be chosen randomly and will be informed via email.
5. Entries that come directly from other websites will not be accepted.
Posted by JD at 11:58

Email ThisBlogThis!Share to TwitterShare to FacebookShare to Pinterest
Labels: The Madame Blanc Mysteries