COMPETITION: Win Save Me Too on DVD 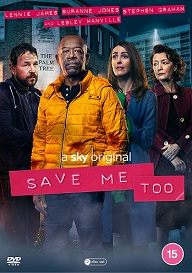 Synopsis
Lennie James makes a welcome return to our screens for the hugely anticipated second series of his gripping, gritty thriller Save Me.  The hit Sky original drama is set to have audiences enthralled once again with this DVD release alongside Save Me Series 1 & 2 DVD Box Set from Acorn Media International.

From the multi-award-winning producers of Line Of Duty this unflinching British drama is written by and stars the multi-talented Lennie James (The Walking Dead, Line of Duty) as our favourite yellow jacket wearing East End charmer Nelson “Nelly” Rowe, who will stop at nothing to save his loved ones.

Save Me Too picks up 17 months after the close of season 1. The furore over Jody's disappearance has subsided, but Nelly's desperation to find his daughter drives him relentlessly on. Gideon Charles (Adrian Edmondson) has been put on trial for the sexual grooming and exploitation of Grace, the young woman Nelly rescued while searching for Jody. Could Grace provide clues to Jody's fate, or will she derail Nelly's quest? New suspects will be revealed and long buried secrets unearthed as Nelly is torn between protecting Grace and keeping alive his search for Jody. Also starring Lesley Manville & Stephen Graham.

Terms and conditions
1. Closing date 29-06-20
2. No alternative prize is available
3. When the competition ends as indicated on this page, any and all entries received after this point will not count and emails blacklisted due to not checking this page first.
4. Winners will be chosen randomly and will be informed via email.
Posted by JD at 21:33

Email ThisBlogThis!Share to TwitterShare to FacebookShare to Pinterest
Labels: Save Me