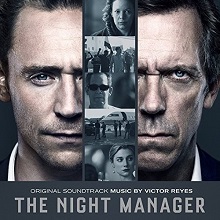 The Night Manager (Original Television Soundtrack)  is out on Audio CD on the 1st April, and to celebrate we have a great competition for you and 3 copies on CD to give away!

Synopsis:
A contemporary interpretation of John le Carr's espionage drama - and the first television adaptation of a le Carr novel in more than 20 years.

The Night Manager brings together love, loss and revenge in a complex story of modern criminality.

Starring Tom Hiddleston, Olivia Colman and Hugh Laurie and with a massive $30m budget, the series is the priciest drama per episode of any commissioned by a UK broadcaster.

Composer Victor Reyes is a major talent from the world of Spanish film and television. In recent years he has enjoyed international success with scores for Buried, Red Lights and Grand Piano. The latter, a taut thriller starring Elijah Wood and John Cusack includes an original piano concerto written by the composer which is integral to the plot of the film and has received high praise from music critics. In 2003 he was nominated for a Goya Award (the Spanish equivalent of the Academy Award) for his work on The City With No Limits, again in 2008 for The Contestant, and in 2011 with the internationally acclaimed Buried. Reyes also earned the 2002 Cinema Writers Circle Award (CEC) for The City With No Limits. Buried was nominated for Best Action/Thriller Composition by the International Film Music Critics Association in 2011.

Winners will be chosen randomly and will be informed via email.
Posted by JD at 12:16

Email ThisBlogThis!Share to TwitterShare to FacebookShare to Pinterest
Labels: The Night Manager