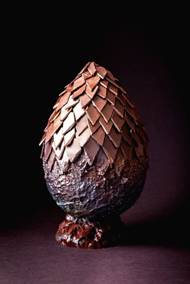 To celebrate Game of Thrones: The Complete Fifth Season arriving on Blu-ray & DVD this month, HBO Home Entertainment® have teamed up with London’s most innovative and stylish chocolatier MELT just in time for Easter to create the ultimate giant chocolate Dragon Egg.

The Dragon Egg is an intricate design and entirely made by hand by Melt’s skilled team of chocolatiers. The entire egg is edible and made out of decadent chocolate; weighs 15kg, is 55cm tall and has taken over 25 hours to create.

On Saturday 12th March, MELT will be unveiling the beautiful one-of-a-kind Dragon Egg at Selfridges. Fans of the epic TV hit will be able to watch the chocolatiers assemble the Dragon Egg scale by chocolate scale between 11am – 1pm. The complete finished egg will then be on display for the rest of the day (until 4pm) for the perfect selfie opportunity. Fans will also have a chance to win a copy of the boxsets.

GAME OF THRONES is one of the most popular television series of the moment and the fifth season will be available on Blu-ray and DVD on March 14th, 2016.