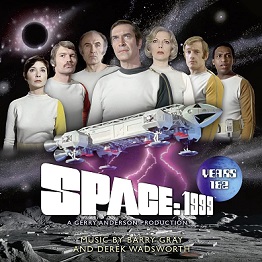 Space:1999 Years 1&2 Original TV Soundtrack - Released on CD from 13th August
And to celebrate we have a great competition for you and 3 CDs to give away.
Synopsis:
The latest release in the series exploring the musical worlds of Gerry Anderson is the most extensive yet and incorporates a 2 CD set with a 28-page booklet plus two separate LP releases.
Space: 1999 ran for two series from 1976 to 1977 and depicted the occupants of Moonbase Alpha and their struggle for survival when, after the explosion of a nuclear waste dump, the Moon is hurtled into space.
The series was the most expensive produced for British television at that time and the most musically diverse of all the shows made by Anderson for ITC. Gerry Anderson’s long-time musical partner in all the previous adventures was Barry Gray and Space: 1999 proved to be the last of their collaborations. For Series 2, composer Derek Wadsworth took over the reins to provide a more contemporary sound.
Pre-order on Amazon: https://amzn.to/3C4bA4x
For your chance to win just answer the question below.

COMPETITION CLOSED
Terms and conditions
1. Closing date 16-08-21
2. No alternative prize is available
3. When the competition ends as indicated on this page, any and all entries received after this point will not count and emails blacklisted due to not checking this page first.
4. Winners will be chosen randomly and will be informed via email.
5. Entries that come directly from other websites will not be accepted.

Email ThisBlogThis!Share to TwitterShare to FacebookShare to Pinterest
Labels: Space:1999