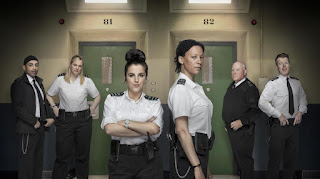 Channel 4 has today released the first look at Screw, a 6x60' drama from STV Studios, by BAFTA nominated writer Rob Williams (The Victim, Killing Eve). We're introduced to the staff (both male and female) of C Wing in a busy men's prison, a place that's bursting at the seams with humour, emotional high stakes and danger for prisoners and officers alike. This is life in prison as never before seen on British television.


At the head of our group of embattled prison officer 'screws' is Leigh (Nina Sosanya – His Dark Materials, Little Birds) a woman who has devoted her entire adult life to this prison and its population. Leigh keeps her inmates in line and has their backs when they need it. But she is an enigma to her team, and has her own secrets that if discovered could cost her more than her job.
Into the pressure cooker of Long Marsh Prison enters Rose (Jamie-Lee O'Donnell – Derry Girls), a 21 year old trainee officer. It's a baptism of fire even for this street smart young woman. She joins fellow screws Ali (Faraz Ayub - Line of Duty, Bodyguard), Gary (Stephen Wight - I May Destroy You, Manhunt), Don (Ron Donachie - Titanic, Game of Thrones), and Jackie (Laura Checkley- King Gary, Detectorists).
Inspired by the creator's experience of working and volunteering in prisons, this series brings us a view of incarceration unlike any other. Through a vibrant and multi-layered cast of characters, Screw tackles contemporary stories head on – but always cut through with comedy, irreverence and heart.