Competition: Win Year of the Rabbit on DVD 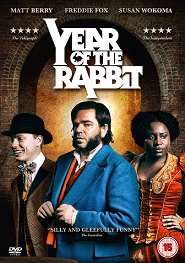 Year of the Rabbit is out on DVD on July 22nd.

Synopsis
Fresh from the success of What We Do In The Shadows, Matt Berry makes a welcome return to our screens in Year of the Rabbit,  a brand new original comedy for Channel 4 set in Victorian London.

This hilarious six-part series is set to turn the detective genre on its head with a brand new crime fighting trio, that sees Matt Berry’s (Toast of London, The IT Crowd), Detective Inspector Rabbit, teaming up with Freddie Fox (King Arthur: Legend of the Sword, Cucumber) and Susan Wokoma (Chewing Gum, Crazyhead). They are joined by a stellar line-up of great British acting talent including Line of Duty favourites Keeley Hawes (The Durrells, Bodyguard) and Craig Parkinson (Misfits, Four Lions), plus Sally Phillips (Smack The Pony, Miranda), Jill Halfpenny (Three Girls, In the Club), Alun Armstrong (The Cane, Frontier) and Paul Kaye (Wanderlust, Afterlife).

Detective Inspector Rabbit is a hardened booze-hound who’s seen it all, his new partner is hapless and by-the-book…when they’re called in to investigate a local murder, they are joined by the lewd, but insightful adoptive daughter of the chief of police, she’s also the country’s first female officer. Together, the mismatched team must fight crime while rubbing shoulders with street gangs, crooked politicians, Bulgarian princes, spiritualists, music hall stars and the Elephant Man.

Directed by BAFTA-nominated Ben Taylor (Catastrophe) and written by Emmy and WGA Award-winners Andy Riley and Kevin Cecil (Veep), with Matt Berry contributing with his offbeat wit and talent Year of the Rabbit is the must-see comedy of the summer.

Terms and conditions
1. Closing date 29-07-19
2. No alternative prize is available
3. When the competition ends as indicated on this page, any and all entries received after this point will not count and emails blacklisted due to not checking this page first.
4. Winners will be chosen randomly and will be informed via email.

Email ThisBlogThis!Share to TwitterShare to FacebookShare to Pinterest
Labels: Year of the Rabbit