The Greek Islands With Julia Bradbury 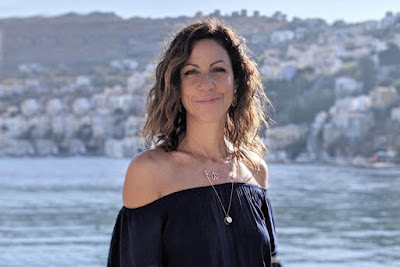 “The Greek Islands are held with great affection in the hearts of us Brits - every year, three million of us head there for our holidays, and it is easy to see why. I have a strong affinity with the islands, my mum is Greek, although she despairs that I still can’t speak the lingo. But I’ve only holidayed here, and never really explored beyond the tourist trail myself, until now. This is a voyage of discovery and I’m taking you with me.” - Julia Bradbury

This new six-part series for ITV features Julia Bradbury exploring the hidden side of the dazzling, sun-drenched Greek Islands.

The Greek Islands are loved by Brits - with three million flocking there every summer. Julia Bradbury has a special affinity with them as her mother is Greek, and that heritage has always been a big part of her life - yet despite enjoying her summer holidays on the islands she doesn’t know much about the real Greece.

In this series she uncovers the hidden side of well-known islands like Corfu, Crete and Santorini as well as uncovering some lesser-known island gems like Symi, Thirassia and Skopelos, location for global smash Mamma Mia, island-hopping her way to her ultimate destination, Chios - the island of her heritage.

She goes off the well-trodden tourist track to discover secret beaches, exquisite coves and unspoilt countryside, immersing herself in the islands’ age-old traditions and sampling some of the best food and drink they have to offer to provide a vivid and surprising insight into some of our most popular holiday destinations.

Julia says: “I am going to see the hidden side, from the historical and rugged terrain of Crete to the glamour of a sunset in Santorini. But I’ll also be taking in the lesser known islands from the architectural splendour of Symi to the natural wonder of Skopelos, before ending my journey on the island where my family story first began.”

This is a Twofour production for ITV

In the first episode, Julia visits the picturesque, rustic and rugged island of Crete, a favourite island with British holiday-goers, but Julia steps away from tourist trail and heads deep into the heart of the island to explore the Dikti mountains and its striking plateau of windmills. She meets goat shepherd Giannis, who shows her how he makes cheese using age-old traditional methods. Back on the coast in the town of Rethymno, Julia tries the delicacy baklava, meeting filo pastry expert Giorgos, who has been producing it for 75 years. She also meets master artisan Nico, who expertly makes the Cretan lyra, a stringed instrument said to be the ‘soundtrack to Crete’.

Her journey ends with a visit to the stunning but poignant neighbouring island of Spinalonga - once an exiled leper colony.

Email ThisBlogThis!Share to TwitterShare to FacebookShare to Pinterest
Labels: The Greek Islands With Julia Bradbury