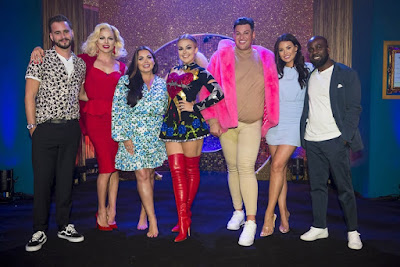 Seven celebrities unleash their vocals as they head into a karaoke bar with the hopes of winning this exciting music competition. Whether their voice is like Mariah Carey or Mariah Scarey, in this competition it’s all about the love of karaoke and commanding a stage - in everything from epic solo performances to group battles.

But there’s a twist, because the people they will have to impress are their fellow competitors, every celebrity karaoke singer is also a karaoke judge. At the end of every episode they’ll be sending someone home, with new celebrities joining the competition also hoping to be crowned the karaoke king or queen.

The celebrities heading into Karaoke Club for the competition are:

In between the rounds the stars can grab a cocktail at the bar or have a good old gossip about their rivals in the toilets, because when the singing stops, the competition really begins. Can the stars form alliances with their fellow competitors and let popularity propel them to victory? Or will they rely on their performance to steal the top spot?

This brand new series sees Scarlett Moffatt, Courtney Act, Jess Wright, Melvin Odoom, Tallia Storm, Luke Kempner and David Potts  take to the karaoke stage with the hopes of being crowned the ultimate karaoke star. Whether their voice is like Mariah Carey or Mariah Scarey, in this competition it’s all about the performance. But there’s a twist, because every celebrity karaoke singer is also a karaoke judge and they are all voting to kick someone out of the club at the end of the night.

And that’s not all because as the drinks starts flowing so does that gossip, and our famous faces chat about everything from their rivals, to threesomes, and who has slid into their DMs.
Posted by JD at 13:59