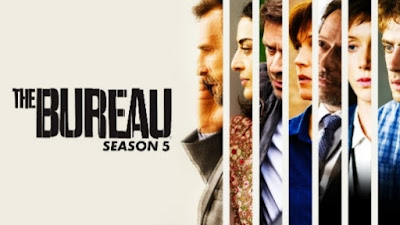 Garnering critical acclaim across the globe and winning awards galore, French spy thriller THE BUREAU is probably one of the greatest TV series you’ve never heard of…But that’s about to change as Sundance Now UK, the AMC Networks’ streaming service available as an Amazon Prime add on, has the exclusive UK premiere of THE BUREAU, Season 5. This exclusive Sundance Now series is streaming now in full (September 17, 2020).

https://amzn.to/2RAQapC - You can watch individual episodes on Amazon, or click the "Watch with Sundance" link for a free trial!

THE BUREAU, Complete 1 – 5 Seasons is also now available exclusively on Sundance Now in the UK. Hailed as “the smartest and most authentic-feeling procedural espionage series anywhere in the world” by The New York Times, the suspense filled series, from creator and showrunner Éric Rochant (Mafiosa, The Patriots) takes us into the undercover world of French agents at the DGSE, France’s leading intelligence centre.

Within the DGSE (Directorate General of External Security), the "Office of Legends" operate the most valuable members of the French intelligence services: secret agents. Spending prolonged amounts of time immersed in hostile countries, these operatives are tasked with identifying potential sources of intelligence among the people they come into contact with. Operating under a fabricated identity, they live for years in a permanent state of double identity, between an apparently normal life and their covert intelligence activity. The thrilling first series begins with one of the top agents, Malotru, (Mathieu Kassovitz, Amélie, The Fifth Element, La Haine) recalled from a lengthy undercover mission in Damascus. Although lauded as a hero by the Bureau, can he settle back into his old life after six years as someone else? And what about the Syrian girlfriend he left behind… is she who she says she is, or could she be his downfall? The highly anticipated 10-part fifth season features two episodes directed by renowned award-winning director Jacques Audiard (Rust and Bone, A Prophet).

JJA (Mathieu Amalric, The Grand Budapest Hotel, Quantum of Solace), Director of Internal Security, has taken over the running of the office as Marie-Jeanne (Florence Loiret Caille, The Little Bedroom) is testing her fieldwork skills in Egypt. The DGSE is shaken by rumours published about Malotru’s (Kassovitz) fate: is he dead or alive and what role did the DGSE and the CIA play? The leaks bring back old demons for JJA, increasing his paranoia and worrying his closest collaborators, Sisteron (Jonathan Zaccaï, Robin Hood) and Ellenstein (Jules Sagot, You’ll Be a Man). His fears are raised when new agent, Mille Sabords (Louis Garrel, Little Women), tries to approach the Saudi secret services while investigating the sacrificial victim Paul Lefebvre. Another collateral casualty of Malotru’s disappearance is César (Stefan Crepon), the genius geek who infiltrated the best cyber-attackers of the FSB, who are now preparing a large-scale operation.

https://amzn.to/2RAQapC - You can watch individual episodes on Amazon, or click the "Watch with Sundance" link for a free trial!

AMC Networks’ streaming service Sundance Now is for culture craving TV watchers looking for their next series to obsess over and offers a rich selection of original and exclusive series from engrossing true crime to heart-stopping dramas and fiercely intelligent thrillers from around the world as well as star-studded films and fascinating documentaries, all streaming commercial-free. New programmes are added every week. Sundance Now UK is available as an add-on subscription service through Amazon Prime Video Channels.
Posted by JD at 09:32

Email ThisBlogThis!Share to TwitterShare to FacebookShare to Pinterest
Labels: The Bureau