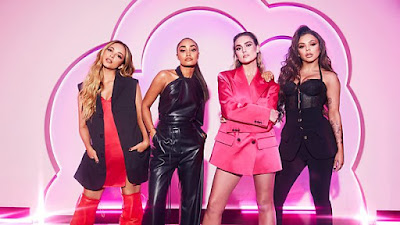 The singers who make it into new bands will live together and gain access to Little Mix’s inner circle who have contributed to their phenomenal success, including creative directors, vocal coaches, music directors, choreographers and producers. 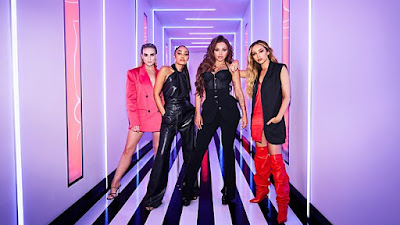 What’s your ambition for the series?

Leigh-Anne: To find the next best big group and be the best mentors that we can be.

Perrie: We wanted the show to be different and unique, and feel fresh and young. We also hoped we would find amazing talent, as if we haven't got amazing talent it doesn’t work. Luckily the talent was so good. The show is everything we wanted it to be.

How is LMTS different to other talent shows?

Jesy: I think it’s more current and fresh. It’s nice to see mentors who can relate to everything, who are living proof that a show like this can make you successful.

Leigh-Anne: The format is completely different to any other talent show. Us girls have been through it, we've been in their shoes and auditioned before. We’ve been successful - we’ve lived it. We can help them and guide them, and hopefully they can follow in our footsteps in terms of success.

Jade: It’s really authentic. We’ve lived the experience ourselves. As mentors we're hands on and want to support them during and after the show. It’s a new way of doing things and we don’t follow the stereotypical rules of a talent TV show. We want to really support the acts, and I think that will really resonate with the audience watching.

How do you hope fans will react when they tune into Little Mix The Search?

Jesy: I hope they love it as much as we love it. I hope they think the talent is good. I feel confident they will!

Jade: I think they’ll be quite overwhelmed at how much talent there is on the show. We’ve had so many incredible singers and artists. It will give people an insight into our friendship as a group. It will be nice for people to see us open up more. People don’t see that side of us all the time.

How was filming the audition stages of the show?

Leigh-Anne: It was really fun. It was actually amazing to know all these incredible singers wanted to be on our show. We were really happy with the talent we found.

Jade: It was really bizarre being on the other side of it and having to judge people. It was very emotional knowing you’ve had to let someone down. At the time when you get a no it can feel the worst thing ever. It was emotionally draining going home knowing you’ve let someone down. But at the same time, it’s amazing when you find insanely talented people so it's rewarding at the same time.

What are you looking for in the contestants of LMTS?

Jade: It isn’t just enough to be an amazing singer. You need authenticity, people love to love the person behind the music. Someone that has something very interesting about them. I love the people that come to the show knowing what sort of artists they are. That confidence and awareness is appealing to me.

You’ve filmed the auditions already, are you happy with your line up?

Perrie: Completely! The whole time we were doing the auditions, we kept looking at each other and saying we can’t believe these people have auditioned for our TV show.

Have there been any moments that have really stood out to you so far?

Leigh-Anne: Every now and again you get that one audition that sticks out. My favourite audition was two boys; they are brothers and an r'n'b rap group. It was really emotional. Sometimes people just connect with you, and it was a nice moment.

Perrie: Certain people when they auditioned made me cry. When you have that connection vocally, it really moves you. We all feel something unique, and we all react differently.

Jade: When we chose the final bands line up. Seeing their journey from their first audition to on stage, we were blown away by how well they gelled. I love that feeling you get when something really special happening in front of you, it’s really exciting.

How was it being on the other side, and judging rather than auditioning?

Jade: With great power comes great responsibility. We all felt it at the beginning with our first nos, it was so hard to say it. As we got into it we realised there was only a certain amount of spaces and we had to decide if people were ready. It's exciting to give someone a platform.

Jesy: I really enjoyed it because I felt we could give a lot of advice that they genuinely took on board. They know we’ve been in that position, which I think helps put them at ease.

Do you have any regrets from auditions? Anyone upon reflection you wish you’d put through?

Leigh-Anne: Yes I do have some regrets. It's annoying when you watch it back and think 'why did I say no to them'. There are also people that the other girls didn’t put through which I'm sad about.

Perrie: I went into this saying I just wanted to be true to myself. There were times when people would fight hard for their place and I'd think - go on then! I wish I’d been more stern but it’s hard when you see how much they want it. Certain people won me over, but deep down I knew it wasn't right.

Did you have any disagreements between yourselves during the auditions? Did you fall out at all over decisions on who to put through to the next stage?

Leigh-Anne: There’s quite a few times where my face says it’s all! We all have different tastes in music, so we’re bound to disagree sometimes.

Jesy: We didn’t fall out, but we defo had disagreements. It didn’t surprise me though, as we all have different taste in music.

Jade: We definitely had disagreements. A couple of times maybe I went off in a huff! There are moments we couldn’t believe someone wouldn’t put someone through. It’s inevitable that we’re not always gonna agree on certain people. But we all respect each other's opinion.

Did you feel bad having to let anyone go/give negative (constructive) feedback?

Perrie: I found that really difficult. Difficult being the decider. Because I’ve been there and I know how much that 'yes' means. I rang my mum crying at one point, as I found it so hard saying no to people. I know how hard it hits when it’s something you're passionate about.

Leigh-Anne: Yeah there was one girl, I felt she was too young. It’s not like we’re giving negative feedback, it’s all very constructive. Sometimes people just aren’t ready, and it would be unfair to put them through if we know that.

Jesy: It wasn’t nice to send people home. I struggled with that, because we know exactly how that feels.

Can you give us any intel about the live shows?

Jade: There’ll be a few surprises. It’s six completely different bands, different genres, and they’ll each bring their own thing, and each be in control of what they want to do. Oh and defo expect some Little Mix performances!

Leigh-Anne: They’re gonna be massive! We’re excited because the performances are gonna be HUGE.

Jesy: It’s gonna be really different because each group will bring their own vibe and their own style of performance.

Did you have memories of your time auditioning on a talent show?

Perrie: I didn’t want to do it, but my mum forced me. I’m really thankful now! I was painfully shy and didn’t wanna do anything that would embarrass myself.

Jade: I just remember being terrified. And when you're nervous it affects your vocals. I sympathise with people whose nerves get the better of them. I remember thinking 'if you nail this it could change your life', which is quite a surreal feeling to have.

Quite a few of the contestants were really nervous; do you have tips on how you overcome your own nerves if you’re ever in that position?

Leigh-Anne: Some nerves are good, as it shows you care. It’s all about breathing techniques. It’s so hard to control nerves, but you can overcome it. Once you feel the support it definitely helps.

Perrie: It’s easier said than done, but if you’re gonna let your nerves get in the way, you’re not gonna do well. It’s 30 seconds, so fake it 'til you make it! Put on a character, pretend it’s not you.

Do you think these shows are the best way to break into the music industry?

Jesy: Not necessarily, but I do think it gives people a massive platform. You get to build a fanbase and showcase your talent for people in the industry like management and labels, so it's all exposure.

Leigh-Anne: It’s what you do after that is important. You have to create music that people will buy into and show who you are as an artist.

Jade: For someone like me from a working class background, I couldn’t afford to move to London, or pay for studio time. My resources were limited. So doing a show like this gives big opportunities. The Search puts people through their paces, and that experience is priceless even if you don’t win. There’s so much experience to be had.

What has been your most memorable experience during your career so far?

Perrie: Just being in the group, with all the laughs and success we’ve had. Doing it together has made it incredible.

Jade: When we won our first Brit award. That was such a whirlwind couple of weeks. We were on tour with Ariana in the USA at the same time, and that moment I thought we’d really made it. It was one of those pinch me moments! We were used to being the underdog up until that point. When we were given that Brit, it was like we were seen and recognised as artists.

What top qualities do you think it takes to be in a globally successful band?

Leigh-Anne: Dedication, drive and commitment. You need to basically want it and work hard.

Who would be in your dream pop super group - if you could take members from any different pop group ever?

Leigh-Anne: Mel B, Normani, Emma Bunton, Beyoncé and all of Little Mix!

What’s the best piece of advice about the industry/your career you have ever been given and who gave it to you?

Leigh-Anne: Know your power, believe in yourself and don't let anyone dim your light.

Sum the show up in three words